Sam Allardyce's tenure as Everton manager looks to be over amid reports that the club will relieve him of his duties within the next 48 hours.

The 63-year-old was due to meet with major shareholder Farhad Moshiri at some stage this week where it was expected he would be informed that he will not be retained beyond the end of the current season.

It appears, however, based on the proliferation of news reports tonight, that the decision has already been taken and the media briefed that the search for his replacement is already underway. Marco Silva, the former Hull City and Watford manager, is the supposed favourite ahead of his countryman Paulo Fonseca who, late-breaking reports say, interviewed with West Ham United this afternoon.

ESPN led with claims from their sources that Allardyce would be leaving Everton later this week and that was followed by corroborating suggestions by Andy Hunter (which will be on the back page of tomorrow's print edition of The Guardian), and the majority of the other news outlets.

It could mark the beginning of a series of significant changes at Goodison Park this summer that may include a new director of football in the form of Marcel Brands, the departure of the club's highest earner in Wayne Rooney, and a new chief executive.

Brands's arrival from PSV Eindhoven has been mooted for weeks now and confirmation from him either way is due any day now. Rooney, meanwhile, appears to be in the final stages of making a switch to DC United of Major League Soccer.

Current CEO Robert Elstone is leaving Everton after 10 years at the commercial helm to take up a similar role heading up Rugby's Super League.

With Everton seemingly in free-fall last autumn following the sacking of Ronald Koeman and amid David Unsworth's struggles to right the ship, Moshiri sounded out renowned Premier League firefighter, Allardyce, along with Silva and Fonseca as potential replacements. 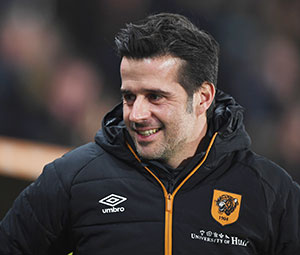 Marco Silva, Farhad Moshiri's top target last November, is apparently still at the top of the shortlist to become the new Everton boss.

After both Watford and Shakhtar refused to allow their coaches to speak with the Blues and as fears of a prolonged fight against relegation set in following crushing defeats to Atalanta in the Europa League and Southampton in the Premier League, Moshiri felt compelled to go back to Allardyce at the end of November with a compromise arrangement.

The former Bolton, Blackburn, Newcastle, West Ham, Sunderland and Crystal Palace boss, who had left the England post a year earlier in disgrace, eventually agreed to an 18-month term worth a reported £6m.

He guided Everton into the top half of the table and to within six points of Champions League-chasing Tottenham by mid-December but could not sustain a consistent run of form to mount a challenge for Europe. The Toffees eventually clung on to eighth place despite losing their final game of 2017-18 at West Ham.

Criticised for negative tactics, a lack of attacking adventure, a chronic shortage of goals, and some heavy defeats to teams in the top six, Allardyce failed to win over Blues fans and was the subject of increasingly vocal chants from the stands calling for his dismissal over the final weeks of the season. That, combined with a desire on Moshiri's part to kickstart his stalled project with a fresh appointment has led to the decision to cut ties this month.

The reports suggest that Silva's appointment may not be entirely straightforward, with the Portuguese still in a legal dispute with Watford over £750,000 he feels he is owed due to premature dismissal from the Hertfordshire club in January.

The Hornets board may still pursue legal action against Everton if they hire him for what they deemed an illegal approach for Silva in the first place last November, despite the fact that the Blues offered them upwards of £15m to part with him.