The details of the Premier League prize money distribution for the season just finished has been released.

The club's earnings for the season are around £21m less than Champions Manchester City and roughly £35m more than bottom club West Bromwich Albion. 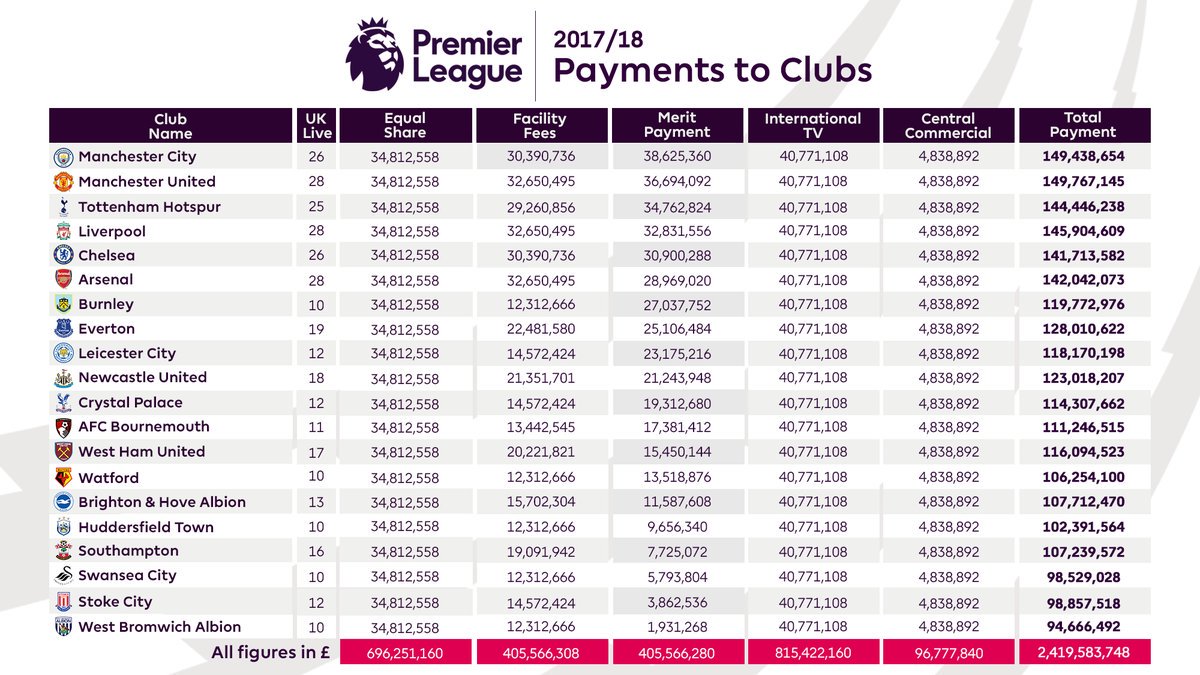 Our job now is not to spit our dummy because six clubs are ahead of us, but to make sure we close the gap. This means qualifying for Europe every season, winning domestic cups (we simply must take the League Cup seriously), being relentless in picking up wins against the 13 and daring to go toe-to-toe with the 6 in one-off matches.

I would be upset as a Burnley fan, who after finishing as high as they have, (their best top league placing in 50 odd years), were only involved in 10 live games. The "Top 6" all shown 25+ times and all receiving around £20M more in income.

I imagine our 19 game haul is mainly due to the wheels falling off our charge for the top 6.

Geoffery Cadman
5 Posted 17/05/2018 at 17:22:18
Finishing 7th and starting the season in July was a contributing factor to our disastrous start to the season. No Proper pre-season, lots of new players, with no time for them to bed in due to two games a week on a Thursday and Sunday or Monday – all added to this.

We need to make top six this season seventh is a poisoned chalice. It was only when Sam arrived we where able to work on things on the training ground. Didn't do a lot of good but made Sam's job even easier.

There's a good chance Arsenal, Chelsea or Spurs could struggle this season for different reasons. Ever the optimist, I see rumours about Usmanov today... I live in hope.

The ‘big 6’ are legitimately defined thusly because they have all regularly qualified for the Champions League.

Nailing the Europa spot will affirm the ‘big 6’ and us as ‘best of the rest’ or ‘very 7th’.

The world has turned. Spurs have graduated, so have Liverpool and we’re just lucky Leicester haven’t managed to build on their Premier League coup.

Pat Kelly
7 Posted 17/05/2018 at 19:03:17
Interesting to note that Everton's merit payment for finishing 8th was £25M. Had they finished 13th (where they were when Allardyce took charge) the payment would have been £15.5M, and considerably less had they just survived the drop (less than £8M).

So, from a purely financial point of view, Allardyce's £9M payment was covered by the higher merit payment received.

Man Utd, Liverpool and Arsenal are level
Then Chelsea and City
Spurs are very much 6th
We're a long way back In 7th
But Newcastle and then West Ham are close behind.

I think if you asked many football fans up and down the country who the biggest 10 clubs in England are then 9 of them would be this top 10. The club missing though, for me at least, is Aston Villa.

It also highlights the gap we need to make up, £7m on facilities and then £9m on merits to catch the 6th club, Spurs.