Klaassen keen to stay and fight for his place 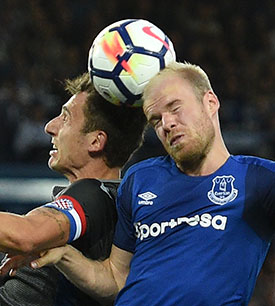 Davy Klaassen's agent has told the Dutch media that far from looking for an exit this summer the midfielder wants the chance to impress Everton's new management.

The 25-year-old arrived from Ajax in a big-money transfer last summer but had trouble adapting to the Premier League in what was a struggling team under former Blues boss, Ronald Koeman.

He made just one start in the Europa League dead rubber in Nicosia against Apollon Limassol between the time Koeman was sacked and the end of the season and came very close to joining Napoli during the January transfer window.

That move collapsed due to an apparent disagreement over image rights and while murmurings that it could be revived have surfaced in recent weeks, it looks as though he would like to stay at Goodison Park after all following the departure of Sam Allardyce.

“Davy is not someone who gives up quickly. He wants to start the preseason at Everton,” said his agent Søren Lerby.

Klaassen's prospects with the Blues could be enhanced now that his countryman Marcel Brands has arrived as the club's new director of football. Brands will have watched plenty of the Holland international during his time with Ajax's rivals PSV.