Williams injured for Wales in draw with Mexico 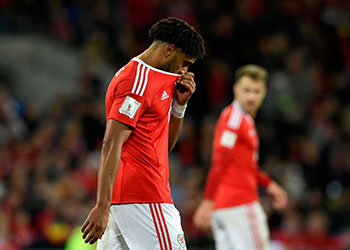 Wales held out for a goalless draw against Mexico on Monday evening despite losing captain Ashley Williams to an apparent rib injury.

"El Tri" had much the better of an encounter played out in the LA heat but Ryan Giggs's men refused to lie down even after Williams was forced off after just 20 minutes.

Missing their star man, Gareth Bale, because of his match-winning involvement in the Champions League on Saturday, the Welsh battled to carve out opportunities but remained resolute at the back against a Mexico side that is preparing for this summer's World Cup in Russia.


Peter Anthony
1 Posted 29/05/2018 at 06:54:51
Williams should move on for his own benefit too. At a lower level, he can get more game time, perhaps in the leagues beneath the top flight, like most Welsh internationals.

Gareth Bale could do a job for us though. Come on, Alisher, you know you want to.

I'd always assumed that one of our lads had flatulence but, if he does it for Wales as well, then it must be Williams who stinks the place out.

I thought we were getting a real leader of men, instead we got a lumbering sulk of a player.

He's been awful for Everton, not even a threat at set pieces like he was for Swansea and Wales.

Like Sigurdsson, he was a good player who stood out as possibly being better than he is in an average to poor Swansea team.

Now calm down, I'm not saying Siggy is not any good, I like Siggy, technically very good but lacks pace and at 28 isn't able to get around the pitch as much as he should or I would like. Not his fault but was that the best we could get for £45m! I'm still shocked by it all.

For me, the two ex-Swansea players have got off lightly compared to Rooney who the majority of fans love to write off.

Love to criticise the money he's on but £45m and £15m plus half and a quarter of the salary... Pfft. I'd take Rooney every day and I hope he stays on for another season.

I can't believe there are Evertonians on this thread showing so much hate. Yes, he hasn't played consistently well for us... but then, very few have.

Keane has been much worse but gets away with it because he is young and more favored. I'm not suggesting we keep him or that he is first choice but I think some of the comments are disgraceful.

James Stewart
9 Posted 29/05/2018 at 17:44:04
Fraud of a player. Talks big and acts like a petulant child. One of our worst signings in recent years – and that is saying something!
Eddie Dunn
10 Posted 29/05/2018 at 18:44:27
Ashley has had problems in a defence that was unbalanced and changed week to week. The lad made mistakes and lost his rag on two memorable occasions.

However, like Jay, I must remind everyone that Williams has been a threat from set-plays and he has shown passion that many were calling for. He has also saved our bacon many times with good clearances and good reading of the game.

The lad is simply slowing-up and we were stupid to not spot it. He is a backs-to-the-wall defender, but Jags is better at it. If he goes, I wish him well.

For a man to go off injured in an international after 20 minutes after a bad season is soul destroying enough but then to have your own supporters celebrating the fact is really putting the boot in and is uncalled for.

Kunal Desai
16 Posted 29/05/2018 at 21:04:53
It's more his attitude than anything, comes across like billy big bollocks, he's consistently poor and has made no attempt whatsoever to show that he wants to fight for his place.

He was given an opportunity with Jagielka out injured and Keane's drop in form but failed to take advantage of it. He seems to have a knack of turning away from shots rather than putting his body on the line, blocking it and saving a potential goal, eg, Watford away.

All he has done was instigated a mass brawl with the Lyon players and threwn in the towel at Burnley. If anyone is a disgrace, it's him. The sad part is that he doesn't even try. Sooner he is shown the door, just like Allardyce was, the better.

Ian Horan
17 Posted 29/05/2018 at 21:26:16
Kunal, Williams is not the only one who turns away; Baines has always done it. I also believe Williams signed a two-year contract with an option for the third year from EFC's perspective.
Kunal Desai
18 Posted 29/05/2018 at 21:36:02
Ian - Baines may also turn away but look at what he has contributed to the club in over 12years. He is now getting on but has been one of the most consistent performers in the side for the best part of 10 years.

Williams is consistent at one thing and that is playing poor.

It's my belief that anyone who plays professional football, be it for Brazil or Rochdale, possess greater skills than the vast majority of fans, and while I can understand the frustrations of supporters, I cannot understand some of the vitriolic criticism.

There are one two players that I am not enamoured by, but I wouldn't subject them to some of the insults that are screamed at them during a game. I express disappointment, naturally, but the main reason for attending the match is to support, that's what supporters do.

Brent Stephens
20 Posted 29/05/2018 at 22:38:15
Well said, John (#19).
Dave White
21 Posted 29/05/2018 at 23:17:06
I find it hard to get my head around Williams's fall from grace. Not many thought he was anything other than a good signing when he came, a proven Premier League performer and international, potential captain material even. But last season, his frustration at his own form boiled over into acting like a complete tit, but then I suppose at least he was trying!

He'll be 34 early next season, whether there's any way back for him I don't know; perhaps the managerial change may give him an opportunity. If failure at Everton does prove to be his Premier League swansong, it's a real shame.

Very disappointing the way his signing has turned out. I really thought we would be getting a solid performer but quite simply he's been very very poor.

I'd like him and his poor attitude gone. Surely Swansea would be interested in him to help them get back up?