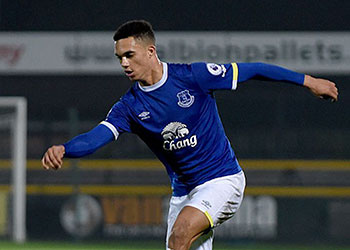 Antonee Robinson played the full 90 minutes and set up one of the goals as the United States beat Bolivia 3-0.

The young Everton fullback was earning his first cap for the USA and he impressed with his pace and trickery while laying on the third goal for Timothy Weah.

Defender Walker Zimmerman opened the scoring with his first goal with a header in the 37th minute and Josh Sargent made it 2-0 seven minutes into the second half.

Robinson spent last season gaining valuable experience on loan at Bolton Wanderers where he made 30 appearances.

A potential long-term replacement for Leighton Baines, the 20-year-old is one of the players new Director of Football Marcel Brands will likely be keen to run the rule over when he arrives at the club at the end of the week.

His debut for his country bodes well at a time when the US Men's National Team is in the midst of transition and some introspection following their failure to qualify for the World Cup Finals for the first time since 1998.

A number of younger and untried players are likely to be given an opportunity shine over the next couple of years before qualifying for the 2022 World Cup begins.