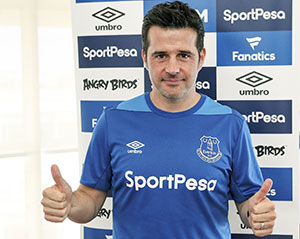 Marco Silva was confirmed as Everton's new manager this afternoon

Farhad Moshiri and Bill Kenwright have welcomed new Everton manager Marco Silva as the second appointment aimed at transforming the club's faltering fortunes on the pitch.

The 40-year-old was confirmed as the Blues' new head coach in an announcement at 3pm this afternoon, two weeks and a day after Marcel Brands was officially announced as Everton's second Director of Football.

The club's hierarchy are hopeful that Brands, who succeeded Steve Walsh, and Silva can bring a more forward-thinking and energetic approach to Goodison Park than was the case under former manager Ronald Koeman and his interim successor, Sam Allardyce.

“I am really pleased to extend a warm Everton welcome to our new manager, Marco Silva,” Moshiri said in a statement.

“As Marcel has pointed out, Marco is a young, dynamic, energetic and very modern manager whose dedication to his job and demanding approach will help us, I believe, to move forward in a confident, purposeful way to where we want to be as a Club.

“His abilities are underpinned by a strong footballing philosophy, a fierce work ethic and his enthusiasm in embracing Everton, our values and our ambitions has hugely impressed me, as I hope it will each and every Evertonian.”

Kenwright, meanwhile, spoke of his confidence that the Blues have a strong management team in place capable of taking the club forward again.

“It is a pleasure to welcome Marco Silva as our new manager,” the Chairman said. “As the posters outside Goodison have proclaimed for many years, DNA is important to Everton and Evertonians. It's what they instinctively search out…

"In Marco and Marcel we welcome a pair of sportsmen whose statements of intent have already shown that they embrace that special quality that Evertonians look for… and with Farhad's vigorous patronage we are looking forward to the three M's, Marco, Marcel and Moshiri, help to take the Blues back to their rightful position among football's elite.”

The ongoing wrangle with Silva's former club Watford over compensation has not yet been resolved but it has not prevented Everton from making Silva their new head coach to work under Brands.

The Hornets sacked Silva in January following a run of just one win in 11 games, blaming the Toffees' unwarranted approach for unsettling the Portuguese and his team after a promising start to the 2017-18 season.

Everton were reportedly willing to pay as much as £15m for Watford to release Silva last November but all offers were rejected. Despite dismissing the Lisbon-born coach, they are still seeking damages via an official complaint lodged with the Premier League.