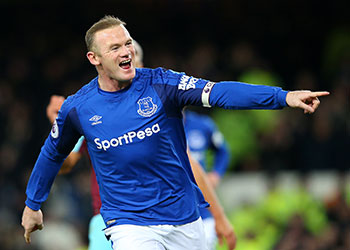 The decision over Wayne Rooney's future appears to lie in the player's own hands after Marcel Brands admitted that Everton and DC United are close to an agreement over a deal for his transfer.

Despite reports indicating that the Blues' new player management team of Marcel Brands and Marco Silva would sit down with the 32-year-old — and, now, statements by the pair that intended to do so — to discuss the possibility of him staying at Goodison Park, there has been an air of inevitability about his second departure from his boyhood club.

A fresh report in The Times is the latest to claim that Rooney is unhappy that Everton sounded out DC earlier this year to see if they were still interested in signing Rooney after they had made overtures to him last summer before he rejoined the Toffees from Manchester United.

Following last summer's outlandish spending, the Everton hierarchy are believed to be seeking to either get the wage bill down or make room for the salaries of new signings this summer and are keen to avoid paying Rooney £8m over the second year of his two-year contract.

Neither Brands nor Silva have offered much to suggest that they were keen to keep the veteran during yesterday's press conference at Finch Farm — indeed, there were tacit indications that the move was at an advanced stage — but they were united in saying that the door to his return in a coaching capacity once he hangs up his boots was always open.

"From what I understand ... the clubs are close to having an agreement, but it is up to Wayne, of course," Brands is quoted as saying. "When you talk about Wayne Rooney, you talk about a legend and a fantastic player. When I came into the club there was a lot going on already with Washington DC.

“I haven't spoken to Wayne myself, I will definitely do that in the coming days, but I understand that he wants to make the next step in his career to the MLS like a lot of big players did. When Wayne Rooney wants that, a club like Everton has to help him in that deal. The only thing I have to say to him is if he wants to come back the door will always be open for him.

"I hope that when he comes back from the States he will come back to Everton in whatever role he wants. We will help him build a new career after his football career.”