Coleman has full faith in Pickford 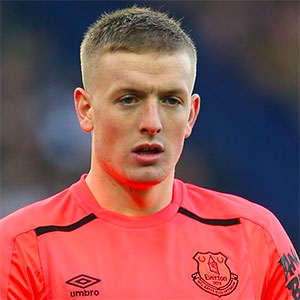 Seamus Coleman is confident that Jordan Pickford will do England proud should he get the nod from Gareth Southgate when they kick off their World Cup Finals campaign against Tunisia.

Everton's No.1 had only earned three caps prior to being handed the same jersey number in England's squad for Russia 2018 but he is widely expected to start the game against the African side later today.

Coleman has seen first-hand Pickford's talents which made him the unanimous choice for Player of the Season at Goodison Park for the season just gone and he says the 24-year-old is fully deserving of his call-up.

“Jordan's had an excellent first season at the Club and shown what a talented keeper he is,” the Irish full-back told evertonfc.com. “He signed for a big fee but has taken everything in his stride, got on with his job, and that shows the kind of character he is.

“It's great for a defender to play in front of a goalkeeper with his talent and his form for Everton has been rewarded with England.

“If he gets the nod at the World Cup, I don't think anyone connected with Everton will have any doubt that he'll go out there and show what he's capable of."


Steve Ferns
1 Posted 18/06/2018 at 09:17:03
More statesman like comments from our captain-to-be. Call me cynical, but why’s Coleman being called on to make comment on something on a more-or-less weekly basis?

Is he being pushed forwards to be the new captain or something? It just seems strange that he’s suddenly talking and talking often.

I wouldn’t be that concerned about how long it takes the expensive flops as long as the ones who have no role to play for the new regime are gone by the start of the season / close of the transfer window.

John Wilson
9 Posted 18/06/2018 at 12:06:45
Pickford makes some obvious mistakes — he is far from the finished article. If he has a bad World Cup, it could affect Everton in the following season.

Sometimes he comes off his line which, on World Cup level, is potential to be lobbed. He is so inexperienced and I do not think he is ready for England yet despite all the hype. Butland, I would have preferred as he is an all-rounder and very talented.

At least Hart would have done a job and he has something to prove.

Steve Ferns
10 Posted 18/06/2018 at 12:27:48
John, as good as Butland is, and I do agree he is very good, he had a bad season and was relegated with stoke. Of the two Pickford is clearly the form player. Hart should be nowhere near the England team, he's finished.

Pope is the one I would say we should have considered more. He is more in-form than even Pickford and so has a good argument to play. However, he needed more time.

If the World Cup was next summer he could have had internationals this summer and then forced his way into the side and got ready for the World Cup. Not having a cap, he doesn't have much of a chance in Russia.

"If he has a bad World Cup, it could affect Everton"?

Yeah, you're right, mate. We should aim for a team of players who have no ambition beyond mid-table football with Everton. That way, when they fuck up, it won't be so bad because there'll be nobody watching.

Pickford has his flaws, but who doesn't. Look at De Gea the other night. Mistakes happen and, rightly or wrongly, that can often define a goalkeeper. However, Pickford is a terrific young keeper who deserves his chance and, as an Evertonian, I'll be behind him.

Apparently, that's not the first mistake he's made for Spain, and the causal Spanish fan, who doesn't watch the Premier League, wonders what all the fuss is about as De Gea has not been as good for Spain as he is in the Premier League.

John Wilson
18 Posted 18/06/2018 at 15:25:25
Hart has experience. I like Pickford for Everton – of course I do. The World Cup stage is the pinnacle of any footballer. I don't know if I could rate Pickford on the world-class stage.

Butland and Stoke going down is just circumstantial. Butland can only do what he can with the limited team resources. He is still excellent. He may not be in form but Butland has not let any in – Butland is capable of world-class saves I don't think we can say that about Pickford.

I don't know enough about Pope to comment on his abilities. However, Burnley have seemingly scored less goals in than any other team in the Premier League but have likely less goals in because they finished in 7th and their team is based on defence, which obviously includes Pope. We also took Pickford who were relegated with Sunderland. The England manager clearly rates him (Pope) to take him. I think this is circumstantial (that Stoke went down) in term's of Butland, as Pickford has proved this season for us. Pickford has still let a lot of easy goals in.

I hope am wrong about Pickford – but her certainly has to raise his game on the world stage, never mind against Tunisia tonight - if we get through our group, into the knock-out rounds. We simply don't know if Pickford can hold his own on this very prestigious international stage with all the pressure that that entails.

On England: England are like a pressure cooker and even though on paper they should be at least decent, I have watched the World Cup warm-up games and think their standard at times is woeful. Once Germany, France, Brazil raise their game, and probably Belgium (if they have good game in a bit) they're each capable of winning the world cup. Germany played excellent in the last third.

I just don't think Jordan's the right man for England even in this young squad, which is equally concerning because young = inexperience. England is like the football equivalent of the 'spice boys' who I hope can perform when it really matters. Tunisia is likely to bring their game tonight and cause some problems for England.

Steve Ferns
19 Posted 18/06/2018 at 15:31:41
John, Peter Shilton has experience. Experience means nothing if you aren't at least competent. Hart is a liability and has been for over two seasons now.

I was listening to David Preece (ex Premier League keeper turned journalist) talk about Hart. He essentially said that once a keeper loses it, you can't get it back. Hart has youth on his side, as this usually happens when a keeper is a lot older. Keepers who fall apart like Hart are usually much older and it's linked to physical injury so if you can recover the injury you can recover the confidence. Hart can turn it around, but Preece did not think that it was very likely. He also said England were very right to keep him away from the squad as number 3, as he would (unintentionally) destabilise the squad by being present and casting a shadow over others.

I should add that Preece is Jordan's biggest fan. I think they worked together at Sunderland, both being from there and playing for the club.

Steve, the average Spanish fan, is not in-charge of recruitment at Real Madrid, but I do take your point though mate.

Who'd be a keeper? I consider both De Gea and the Costa Rica keeper both out of the top drawer; it never ceases to amaze me how they line up their walls and are still beaten because they leave too much of a gap for the man taking the free-kick, to aim at.

If a keeper can't see the ball, he's making it too hard for himself, and for this reason I can never understand why they sometimes don't leave a little gap in the wall, especially if it's going to help their starting position, which is the reason why so many of them are done by free-kicks?

Steve Ferns
22 Posted 18/06/2018 at 16:27:24
Tony, that Perez seems to take a populist approach to transfers. He signs players the fans want, not players that the team needs. So I think what the average Spanish fan thinks is very important to Real.

But then, I'm taking the approach I'm accusing them of!

Geoff Lambert
25 Posted 18/06/2018 at 18:33:57
John! how much older than Pickford is your dream boy Butland?
David Ellis
26 Posted 19/06/2018 at 05:24:50
John Wilson - Hart?? really. He's off form and has been for two years. He was a disaster at the last Euro Finals. Pickford may not be the best 'keeper in the World but he's on form, played two full seasons in the PL (in every match) and has a lot of experience of playing these tournaments for the age group teams. Butland may be better, but he's been coming back from injury (constantly it seems) and Pickford is playing better at the moment. So can't fault Southgate for picking Pickford.

He rushed out once vs Tunisia but fortunately they were offside...otherwise it would have been a dodgy moment. And his distribution was pretty poor I thought. Got fingers to the penalty but really didn't have much to do. Hopefully the nerves will be calmer after the first game.