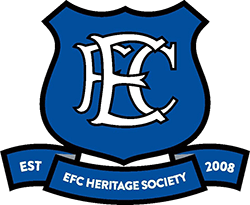 The late and great Harry Catterick, who won two league titles and one FA Cup while in the Goodison Park hot seat between 1961 and 1973, is to be remembered and saluted by supporters and former stars just four days before what would have been his 100th birthday. You can be part of this emotional gathering for the ‘Catterick 100’ evening - organised by Everton FC Heritage Society - at the Park End ‘People’s Club’ Lounge on Friday 22nd November at 7.45pm.

Like the immortal Dixie Dean five years earlier, Harry died at the stadium where so many of his greatest football triumphs had unfolded. He was taken ill in the directors’ box on 9 March, 1985 during Everton’s sixth round FA Cup clash with Ipswich Town and could not be revived. Harry’s gravestone bears the club’s famous motto ‘Nil Satis Nisi Optimum’ which he certainly lived up to throughout his Blues’ managerial career while working with legendary chairman, the late Sir John Moores.

Guests will hear the inside story of the Catterick style that turned his Goodison era into one of the most glittering in EFC history, as told by some of the talented individuals who played for him. Names confirmed to attend, thus far, are Joe Royle, Derek Temple, John Hurst and Ronny Goodlass.

‘Catterick 100’ will be a timely tribute to the great man who also wore the famous number nine for Everton between 1946 and 1951. It will be an opportunity to revel in the achievements of the contrasting, but supremely talented Championship teams of 1963 and 1970, while also remembering that eventful day in 1966 when ‘Mr Everton’ Brian Labone proudly held aloft the FA Cup at Wembley.

The event will also include the latest presentation of the prestigious Liverpool Echo Dixie Dean Memorial Award. All those attending will go away with a story-packed free book worth £18.99 - ‘Harry Catterick: The Untold Story of a Football Great’ - by Heritage Society author Rob Sawyer.

Bar facilities will be available throughout.

To secure your tickets, priced at £18 and including a copy of Rob Sawyer’s biography of Harry (RRP £15.99), visit: https://www.toffeeart.co.uk/product/catterick-100-evening-ticket/

Alternatively you can purchase tickets in person from Ken Rogers’s stall upstairs at St. Luke’s Church Hall between 1:30 and 4pm on Sunday 3rd November before the Spurs match.