Anti-racism banner part of Everton's 'Kick It Out' matchday

The fan-funded anti-racism banner inspired by Moise Kean's experiences in Italy will be unveiled ahead of Everton's home fixture against Manchester City this Saturday.

The banner is the culmination of a social media campaign led by fan group, the County Road Bobblers, to show solidarity with Kean, a summer signing from Juventus who was a victim of racist abuse from the terraces during a fixture in Serie A last season.

The banner, sporting an image of Kean and the words ‘No Al Razzismo' (No to Racism), will be unveiled ahead of the game in the Gwladys Street End.

David Wycherley, Lee Mitchell, Michael Cummins and Greg Neill, on behalf of fan group The County Road Bobblers, led the campaign to create the banner, making it clear that Everton stands up to racism and ensuring that striker Kean — and all Everton's signings from around the world — feel welcomed at the Club.

The fan group sent a tweet from their account to raise the idea of the banner and it quickly went viral, resulting in a fundraising campaign which quickly smashed its initial £1,000 target. 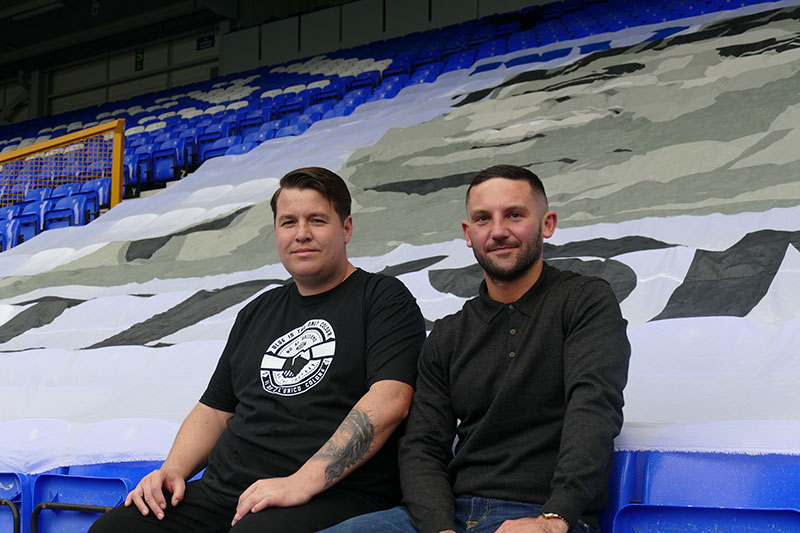 Their efforts caught the attention of news outlets in the UK, Italy and around the world, with Evertonians commended by Kick it Out and Moise Kean himself, who said, “The banner is beautiful because racism is horrendous and we have to fight against the racists. I'm going to repay my fans for all they do for me. I'm feeling even more motivated to repay them by training at 100 per cent and giving the maximum I can.”

Fans from across the globe have given more than £3,000 — enough to fund the banner and donate more than £1,000 each to Kick it Out and the Blues' award-winning charity Everton in the Community.

The match will also mark the Club's annual Kick It Out fixture for the 2019/20 season, with Marco Silva's players warming up in Kick It Out t-shirts and Kick it Out messaging visible around the stadium. Keeley Baptista, Partnerships Manager from Kick it Out, and fans who led the fundraising campaign will also appear at the Fan Zone outside the stadium.

Everton has also announced the Club will match the donation by fans to Kick It Out, further supporting the vital work done to promote and raise awareness of inclusion.

The banner has been created and printed by Gwladys Street 1938, after consultation with fans on its design.

David Wycherley from The County Road Bobblers said: “When Moise Kean signed for us, Everton fans were delighted. I had followed Kean's progress in Serie A, and really felt for him when he faced racism on the pitch. I admired how well he dealt with it, especially for such a young player. It feels like he has come to the perfect place — The People's Club. He won't have to stand alone against racism — he now has hundreds of thousands of Blues around the world standing shoulder to shoulder with him.

“Evertonians have really come together to send this positive message, and the support from the Club has been amazing. We see our players as role models and heroes who represent us on the pitch, and we treat them as such.”

Fellow County Road Bobbler Michael Cummins added, “Although we are leading on it, it is everybody's contribution that is making it happen. We wanted the banner to be representative of the people who had donated and to deliver a collective message from Everton fans.

“The final banner is a message directly for Kean, and in Italian. We now want to look at how we can support diversity across the whole spectrum and linking in with the Club's All Together Now Campaign, we want to get the message out there that football should be a safe and welcoming space for everyone, and that everybody is welcome at Goodison Park.”

Scott McLeod, Head of Communications and Engagement at Everton, said: “Diversity and inclusion is embedded in everything we do as a Club and we fully support any initiatives from our fans that demonstrates the Club and fans stand together. It is so appropriate that the banner is being revealed for the first time this weekend, as it is our Kick it Out fixture. As a symbol of our solidarity with the fans, the Club will match-fund the money raised for Kick it Out.

“The message through this banner is loud and clear and we are proud that our fans have come together to amplify such an important anti-racism message.

“We are The People's Club and we pride ourselves on being open and welcoming to all.”


Derek Knox
1 Posted 24/09/2019 at 18:08:23
May I congratulate the two of you, David and Lee, for taking the initiative to get this up and running, there is no place for that sort of thing in football regardless of which part of the World you are in.

Let's hope that many other Club's Supporters follow your example, and you are a credit to Everton Football Club and fans alike.

Don't suppose you could start another campaign off to get us playing better and scoring goals. 😂👍😋