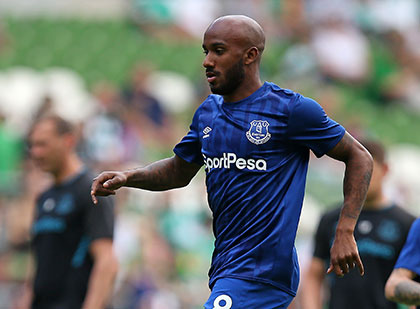 Fabian Delph's return to fitness and his performances for Everton have earned him a recall to the England national side.

The 29-year-old, who has been capped 20 times, joins his Everton team-mates Jordan Pickford and Michael Keane in Gareth Southgate's squad for this month's European Championship qualifying games against Czech Republic and Bulgaria.

Delph made his senior international debut in November 2014 and he featured for the Three Lions at last year's World Cup in Russia.

Meanwhile, Lucas Digne has been selected by France for their games against Turkey and Iceland.


Justin Doone
1 Posted 04/10/2019 at 06:18:22
I'm happy for him that his move to play more football is working and has been recognised. But I'm worried about his fitness and recent long term injury record.

I doubt he can prove anything different to the international setup and I don't believe he's one of England's best midfielders deserving a call up or that he'll get much playing time.

I have a "Mccarthy" feeling about this which does not bode well for Everton.

Hopefully his professionalism and recognition will help others to give their all for Everton and help us and them find a winning solution.

Cristobal Aguirre
2 Posted 04/10/2019 at 07:03:50
Happy for him but honestly speaking his performance for us has been not good enough. I think he does not deserve the call up. Hope that this Nomination being an incentive for the future.
Kevin Prytherch
3 Posted 04/10/2019 at 09:04:21
I thought he played well against Man City. After the first 5 minutes you could see he was tasked with keeping De Bruyne in check. That's why the first goal was so disappointing when Digne dived in forcing Delph to leave De Bruyne and cover for Digne. Then the ball gets passed to De Bruyne and they score.
Ken Rushton
4 Posted 04/10/2019 at 09:28:23
Congrats. Fabian well deserved recognition. A shrewd purchase the bargain of the last window.
Jim Harrison
5 Posted 04/10/2019 at 09:33:34
I have thought in the limited time him and Gomes have been on the pitch together they looked a good pairing. And to be honest I think he has looked a class above in general, a few poor passes but he is obviously used to playing with better players.
Tony J Williams
6 Posted 04/10/2019 at 12:24:54
I'm with Cristobel on this, don't feel his individual and team performance merits a call up.

Probably the same with Keane too.

Give it one more time and he'll be dropped quicker than a thing that's dropped really quickly, as he's not a Citteh player anymore.

That said, as mentioned by others in this thread, Delph's selection must either be based on past performances and what Southgate considers he brings to the team, rather than anything he has done this season in the blue shirt of Everton. Or, it highlights a real dearth of alternatives for his position in the English game.

Danny Broderick
8 Posted 04/10/2019 at 16:39:16
Some strange comments on here. Delph has been very impressive for us. I think he wasn’t great at Bournemouth away, but apart from that he’s been brilliant for us. He’s a leader, he covers every blade of grass, he gets stuck in and he can pass a ball. He also gives a balance to the left side of the team. Why wouldn’t he be in the England squad? He has qualities no other English player does...
Tom Bowers
9 Posted 04/10/2019 at 17:22:05
Whilst Delph has been playing well and has all the experience to deserve another call up I am not sure that the prestige once attached to being called to the England squad is not like it used to be.

This guy Southgate sees a player having one or two good games and then immediately picks him. It also helps being with a London club and has always been that way for many years.

Southgate is a doofus in my books. He somehow can leave out the best right-back in England (Kyle Walker) and picks Tammy Abraham, who is on a par with Calvert-Lewin in ability but of course plays for Chelsea and then Barkley who has not shown he is any more capable than Tom Davies.
Delph is certainly better than Henderson on current form.

I don't know how you can possibly put Tammy Abraham on par with Calvert-Lewin? Abraham has been a prolific goal-scorer for over a year now. He bagged 25 goals (I know only in the Championship) last season for Villa and has scored 8 goals in 10 games for Chelsea so far this season.

I like Calvert-Lewin and think he has come on in leaps and bounds from when we first signed him. His all-round game is pretty impressive: strong, quick (once he gets into his stride), holds up the ball pretty well and presses. The one part of his game that needs to improve (which strikers are judged on) is his goal-scoring tally. If Calvert-Lewin could match Abraham's impressive strike-rate stats, there would be few better strikers in the Premier League.

I don't think it's easy being a centre-forward in a dysfunctional team like ours. Moise Kean had a great goals-to-minutes ratio at Juventus (as he has playing for his international side, Italy) but he was playing in a team with much more cohesion which created more chances. He doesn't get the same luxury with us.

As for Delph, I think he is one of the few (or only) natural-born leaders we have in our squad. For the most part, he's being pretty impressive thus far... especially on his league debut. I'd very much like to see (when everyone is fully fit) a midfield three of Gomes, Delph and Gbamin. Sigurdsson should drop out to allow for a 4-3-3 formation. Siggy has offered very little this season to justify him being in the starting 11.

Dave O\'Connell
12 Posted 05/10/2019 at 08:49:49
I couldn't give a toss about England and players who think there superstars became they get a call up, ie, Pickford and Keane. All that matters is Everton and how they perform for us – not going somewhere to sit on a bench and the risk of coming back injured.
Jerome Shields
13 Posted 05/10/2019 at 10:10:43
I am glad that things are going well for Delph, but with his injury record I would prefer he concentrate on his club career, if he gets injured playing international footbal!, what use is that to Everton.

Most of us think he is a good addition to the squad and has showed great ability in his role. We also hope that Delph, could stay fit and be able to play in that role in a regular bases.

Like Ireland, the England I international set up, won't care to much about his rehabilitation or whether he is fit to p!ay for Everton. Southgate knows he is up against it as far as his ability and squad is concerned, so he is bring in everyone and anyone in the hope of changing the inevitable outcome. The same as Ireland's two clowns did.