Silva: Norwich result was tough but we have to be strong 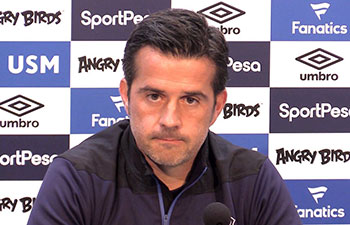 Marco Silva has addressed the fevered speculation about this future following Everton's seventh defeat in 13 Premier League games last weekend by insisting that he has not been given an ultimatum by the Board and he is focusing only on matters he can control.

The Portuguese has faced calls for his ouster this week in the wake of what was a dreadful performance against the Canaries but, having briefed the media that the manager would be in charge for Sunday's trip to Leicester, the club offered a show of unity today, posting an interview on evertonfc.com with Director of Football, Marcel Brands.

The Dutchman intimated that the Board and manager will stick together to try and turn results around while Silva himself faced the media in his pre-match press conference ahead of the visit to the King Power Stadium, stressing that all his focus has been on the squad and preparing them for a tough run of fixtures in December.

"The defeat we had last week was, of course, a tough moment for us because we expected something different in terms of the result and the performance,” Silva explained. “I was really disappointed after the match and I shared that opinion with our players.

“I can tell you, like always when we have a bad result, there has been a strong reaction from our players. Of course, we're not in a happy moment but we have to react and keep working really hard.”

Silva was asked by Vinny O'Connor of Sky Sports if he was aware of the all the speculation over his future, and if he feared that he might not still be in the job by the time the team travelled to Leicester this Sunday, and he replied:

"I didn't see [all the speculation]; I didn't read it at all. I had the feedback [from our immediate people] but it's not part of my day to read or see this. Again, I try to put all my energy into things that can help me, my players and the club to perform and to improve.

“About the rumours, of course I know something of what's happened there but it's nothing that would disturb my daily [routine] or what I should be doing to prepare us for the next game.”

The manager was pressed further on the nature of his conversations with the Board and whether he felt he had the full support of the hierarchy going forward.

"We had a conversation on Saturday and again on Monday,” Silva said. “My contact is permanent with Marcel… every single day here at Finch Farm. What we did last Saturday is something we do often; it was not the first time.

Silva rejected any notion that the Board had set a limit on his tenure based on results this season and joked that he feels like has been getting the same question about his future for most of the season. He also addressed the issue of his relationship with the Everton fans which strained to breaking point when Norwich scored their second goal last weekend.

“No, never,” he said, when asked if he had been given an ultimatum by the Board. “But, I have to be honest with you, you've been asking me that since the fourth game of the season! It's something I hear every single pre-match press conference. You were asking my players after the Wolves match about the pressure on the manager if we didn't win this game. It is not new for me.”

"I won't lie to you; it was tough [after Norwich]. The [biggest thing] behind a football club is its fans and their support is really important. When they're not happy and they show that, it's not the best moment for a manager or for the players.

“For me, it was not a good moment. I prefer to have them enjoying us winning but it is what it is and we have to be strong and understand their reactions; work hard and give them the performances they want to see.

“I share their frustrations but it wasn't just them or the manager who was disappointed. All of us [in the dressing room] were disappointed but I have to be fair with my players as well. Our confidence is not high but they are working really hard this week.”


Steve Carse
2 Posted 29/11/2019 at 17:23:55
This interview confirms to me that Silva and the players were taken by surprise by Norwich's quality. The same goes for many of our fans I suspect. The result confirmed that there is no Fulham or Huddersfield this season, clubs who last season were virtually certainties for two of the relegation slots well before Christmas. It is this realisation that explains much of the current anxiety and anger amongst Blues, the fact that we look in for a season long relegation slog.
Like most I can't see Silva lasting beyond next Thursday. I suppose that in football there are always instances where a team gets totally outplayed but somehow, often though pure luck, get a win. But I can't recall such an occasion in our favour for many moons.
Paul Jeronovich
3 Posted 29/11/2019 at 17:29:57
Yet more garbled gibberish from Marco. His substitutions, team selection and same old tactics were a major contributing factor to the mess we witnessed last weekend.
Derek Knox
4 Posted 29/11/2019 at 17:58:36
Norwich, tough? Your tactics, team selection, and lack of ideas made it tough, coupled with the players lackadaisical attitude, there was no sign of pride or fight amongst them!

It was mentioned many times pre-match, with various comments, alluding to the all too sorry statistic that EFC have been culpable too many times of playing against a side who had not won against anyone, but ended that all too easily against us.

Joey Crawley
5 Posted 29/11/2019 at 18:21:41
Schumfing tells me Marcel hash been schmoking some good auld Dutch schpilffy recently and he’s gone all soft and gooey on the inside and forgot in his foggy schmokey haze that Marco has lost whatever tactical football knowledge he supposedly had we he arrived at Goodison. Put it out Marcel before you end up on the slag heap with Silva.
Neil Lawson
6 Posted 29/11/2019 at 18:55:46
Sunday will be an interesting (to say the least) day for Marco. He knows he is on his way out unless miracles happen, so he could go for broke and send out a much altered or reshaped and reorganised team. Shit or bust. However, we know he won't. There will only be a few tweaks.

Sadly, many true Blues will not be unhappy with a defeat as it seals his fate. But this is our Everton. Who knows what actually will happen??? I for one, have no clue.

The way we are playing a couple of draws out of the next 6 fixtures would be a miracle.

By the way only joking, this guy can't be gone quick enough for me!

All tge deadwood would leave in droves and we would be left with players wanting to fight to get into the premier.

If you'd have said Liverpool would be nailed on win the league and we'd be relegated to me last year I'd have been horrified. At the moment there's a lot of apathy around the club, and I'm pretty apathetic towards our predicament.

It's been coming for three years now. Ever since Moshiri took the reigns we've made all of the wrong moves.

Chris Gould
16 Posted 30/11/2019 at 09:23:38
What was gibberish? Sounded reasonable and perfectly coherent to me. Silva is under pressure, he's not getting results, but why get so spiteful? He's a likeable man who's undoubtedly trying his best. It's not working out, and he'll likely be gone before Xmas, but he doesn't deserve such hostility. Whether you agree with his tactics or lineups doesn't matter. You don't know that the alternatives would fair any better.
Whenever players under perform the pressure is on the manager to get the best out of them. Sometimes it appears that the players simply don't care enough in the knowledge that the manager will get sacked, leaving them to carry on regardless. Maybe if players were benched, with the realisation that the manager won't be sacked, they would fight harder for their place in the team?
I am not at all convinced that Silva can get the best out of this squad, but I feel he has been let down by a poor summer's transfer window and that any manager would struggle with the injuries we are currently contending with.
Losing Zouma and Gana was huge. They weren't adequately replaced and we have a weak spine. This needs to be addressed in January.
Eugene Kearney
17 Posted 30/11/2019 at 09:36:21
Excellent post Chris #16. I don't know what to think any more. These past three seasons seem to be a terrible waste (given the amount of money we've spent).

We are is the same predicament as two years ago. I don't think so much hostility should be thrown at Silva. Complain and criticize, yes, but he is not the only one to blame and thankfully we won't be giving SA another interim contract just because we are 16th.

Pat Kelly
18 Posted 30/11/2019 at 11:48:44
"We're not in a happy moment". This guy is the master of the understatement. It's just surreal if the Board, Brands included, really think this joker can turn things around.
Mark Guglielmo
19 Posted 30/11/2019 at 14:17:38
Great post Chris @16. The level of vitriol is quite frankly, astounding. I also find him extremely easy to understand, both his actual speaking a 2nd language and the intent of his message.

I see lots of complaints that his "demeanor" is too reserved, or, unemotional, or whatever. It makes me wonder what is actually expected in those regards? I don't watch many other manager's pressers, so do others do something different?

People are angry because Silva doesn't learn from his mistakes.

We're bored with conceding from set-pieces.

We're bored with only ever playing 1 striker up top.

We're bored knowing that, if we concede first, then we won't win.

We are so tired of watching the usual rubbish that rarely changes: Schneiderlin, Sigurdsson at No 10, Walcott playing, the immobile and unpacy Tosun etc etc.

We had aspirations of top 6 and Silva and his mate Brands have totally scuppered that and we are now in a relegation fight.