Mina: We have the tools at Everton to be successful 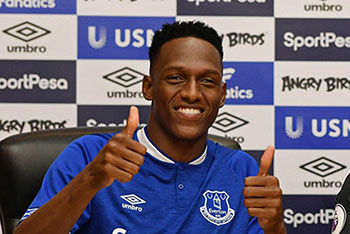 Yerry Mina says that he and his team-mates must not only work towards success but they need to achieve it as well as he speaks of Carlo Ancelotti's early impact on the squad.

Speaking in The Telegraph, the Colombian expressed his satisfaction at finally scoring another goal in Everton colours — “I have been waiting over a year for that,” he said — after bagging a brace in last weekend's 3-2 win at Watford and described how his poor upbringing and the opportunities he has been afforded by professional football have influenced his happy-go-lucky attitude to life.

“Wins are always sweet, but they are definitely more special when you have suffered a bitter feeling like we did against Newcastle in the previous game,” Mina said before recounting what his new manager said to the players after they had tossed away two points in stoppage time against the Magpies.

“Literally, this is what he said: ‘Guys, the sun will rise again tomorrow'. He did not come into the dressing room moaning or shouting at us, He just looked at us and spoke very calmly. I could see what type of person he is at that moment.

“There is no panic, only calmness, assessing the situation, taking it in his stride and looking forward to getting back to work the next day.

“Every day he says many incredible things – whether to the group or personally, taking you to one side. He is a winner; that is the most important thing about him. He is used to winning, he wants to win, and he knows everything tactically.”

Everton have improved markedly under Ancelotti, with the Italian picking up where Duncan Ferguson had left off in lifting the team's spirit following some damaging defeats and the sacking of Marco Silva in early December.

It means that tomorrow's clash with Crystal Palace will not be one pregnant with fears about a relegation struggle but one where a victory for the Toffees would lift them level on points with Sheffield United in sixth place, at least until the Blades play Bournemouth on Sunday.

“We have the tools to be successful,” Mina explained. “We have lots of internationals here,” says Mina. “Whether the game is going well or badly I give everything. I am trying to become better.

“Not only must we work to achieve,” he says. “We must achieve.”

Take the win tomorrow and to finish as high as possible and keep the form going to the end of this season.

Hopefully this is something he's working on during training.

Steve Ferns
3 Posted 08/02/2020 at 09:50:40
Good to see Calvert-Lewin interview him in English for EitC. Mina’s English is definitely coming along. There’s a suggestion that Mina might be the captain once he masters it. But what about Calvert-Lewin himself? Articulate, intelligent and someone destined to be the face of the club in the near future.
Alan McGuffog
4 Posted 11/02/2020 at 08:49:09
I remember it well Paul. A Palace mate of mine came up for it. They were media darlings managed by Venables and had been anointed " team of the eighties ".
Rather a good day all round.
Ben Miller
5 Posted 11/02/2020 at 23:10:18
Have to admit, he's not wrong. There have been a few times the past couple of seasons where I've been looking at the players on the pitch and thought, wow, what a bunch of tools.
Jay Wood
[BRZ]
6 Posted 12/02/2020 at 00:39:15
Steve @ 3.

I enjoyed the video you reference for many of the reasons you mention.

Dominic clearly has a future working in the media. He was excellent in the role for the reasons you list: Articulate, intelligent and to that I would add personable and charming.

I was delighted to see and hear Mina's evident progress in English, but not surprised. He has a brash personality that lends itself to language learning. There is an evident bond between Mina and DCL also, with Dom saying he helps his English whilst he is learning Spanish from Mina.

On Mina's heading at both ends of the pitch which has been a topic for discussion across TW since he arrived, I must say I'm a tad baffled by what he has shown in that regard in the Blue of Everton.

As a raw 20-year-old with eventual champions Palmeiras here in Brazil he was a MONSTER at both ends of the pitch. He cleaned out everything aerial in defence and was an unstoppable force in the opposition's penalty area.

He hasn't consistently shown that in his game in the PL, but he most definitely has it in his locker. For whatever reason, his positioning and timing when heading the ball has been off at Everton. He is much, MUCH better than he has shown us in England to date.

Hopefully, that presence and domination he displayed in Brazil will return soon.

It was in a series called Premier League World, and this one was called ‘The Architect’. It was about the career of Marcel Brands, and it is thoroughly enjoyable. It lasts about 30 minutes.

It didn’t have the usual Sky gobshites on it, but featured Van Gaal, Jol, Cocu, Van Nistelrooy, plus the senior guys at AZ Alkmaar, PSV, and others. It also had Ancelotti, and players, like Bernard, Richarlison, Mina.

It gives a decent insight into how this guy works and how highly he is rated.