Mina could be back sooner than thought 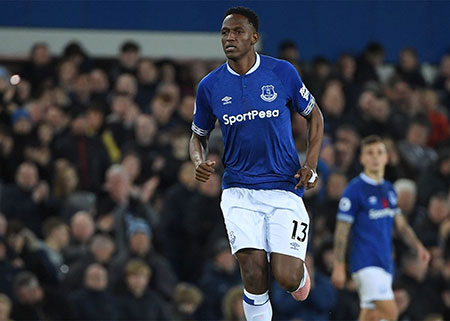 Contrary to initial fears that he was facing a layoff of several weeks, Yerry Mina is reportedly targeting a return to training before the end of June.

The Colombian suffered a partial tear of a quad muscle in training this week and there were suggestions from some quarters that he might miss the rest of the restarted and expedited season.

At the very least, he wasn't expected to resume training until well into July but, according to the Liverpool Echo, Mina says he is targeting being back at Finch Farm before the end of the month.

As it is, Carlo Ancelotti will have just two fit senior centre-halves at his disposal in Michael Keane and Mason Holgate when the season gets back underway in a couple of weeks' time.

We may need to play a Motley Crew of 5 across the back for the derby, because that pairing will be torn to shreds.

We always soil the bed. Got twatted by their B team 5-2 and then lost to their C team 1-0.

And it's been going on your years now.

He has one almighty job on his hands getting anything decent out of the squad we have at the moment. The majority are bang average footballers at best.

Still can't say with all honesty I am looking forward to this playing behind closed doors fiasco, but Sky and the other money mongers have got their way again.

Brian Harrison
7 Posted 05/06/2020 at 16:32:20
I see it's being reported that PSG have had 2 offers from Premier League teams outside the top 6 for Idrissa Gueye. My golden rule is always never go back but I would make an exception in his case.
Sam Hoare
8 Posted 05/06/2020 at 16:43:49
Would love Gueye back! Though he will turn 31 in Spetember which goes against my older player bias. He was pretty good for PSG last season, I'd be surprised if they let him go easily. Could we swap him for Schneiderlin?!
James Flynn
9 Posted 05/06/2020 at 17:19:17
PSG's manager sure seemed to love him. Wonder what happened.
Mike Gaynes
10 Posted 05/06/2020 at 17:44:54
James, they're in for Sergej Milinkovic-Savic from Lazio, who is much younger and cheaper, and they also have a couple of youngsters they really like. And PSG is as money-conscious as anybody these days. They're paying Neymar, Cavani and Mbappe a million and a half euros a week combined. So a 31-year-old on an annual salary of â‚¬4.2 million is dispensable, no matter how much they like him.
Martin Berry
11 Posted 07/06/2020 at 19:46:41
Mina is still learning but he will be really good for us. I think he will score a few from set-pieces next season and become a top centre-half. Just give him a bit of patience.