The history and heritage of the Club exerts a strong pull on most Evertonians.Â  As I live less than an hourâs drive from Seafield Cemetery in the Leith area of Edinburgh the opportunity to attend the ceremony to mark the unveiling of Alex âSandyâ Youngâs new gravestone proved impossible to ignore.

I arrived at the cemetery about half an hour before the ceremony was due to start and parked up easily enough.Â  A piper and a few people with long lens cameras were visible through the gravestones, suggesting that I was in the right place. Â As I walked over, I got chatting to a man a few years my senior who had heard about Sandyâs story in an article in the Daily Record last week, written by an old university pal Gary Ralston. Â He shared an anecdote about Sandy during his later years reflecting the hard times that had come to him. Â He had felt he just had to turn up and pay his respects, and seemed genuinely touched by the gesture and the turnout of people. Â I introduced him to Paul Wharton when he arrived in case he wanted to share more of his memories of Sandy.

As people started to arrive, the piper started to play which I managed to record on my iPhone.

After the piper had played âGrand Old Teamâ there was a short ceremony. Â Paul Wharton described how the Heritage Society became aware of the unmarked grave and how the funds for the new headstone were raised. Â Then Peter Lupson gave a tribute to Sandy, also highlighting the long tradition between Everton and Scotland with 124 Everton Scottish players serving the club, and noting that a Scot had been involved in every one of Evertonâs FA Cup wins. Â No pressure on Steven Naismith then! Â As the Echo reported , club chaplain Henry Corbett sensitively covered the circumstances of the tragedy that occurred in Australia.

One of the family members then described how this gesture had brought many of the distant family together, and he thanked all concerned including the Everton fans who made this happen.Â  This was followed by the laying of a wreath and flowers by various family members. Â

Media interviews and photographs followed, with the extended Young family gathering for a group photo to remember the day. Â Evertonians will no doubt appreciate the iconic photos of former Everton players honouring one of the past greats. Â The photos can be seen on the Everton official website. 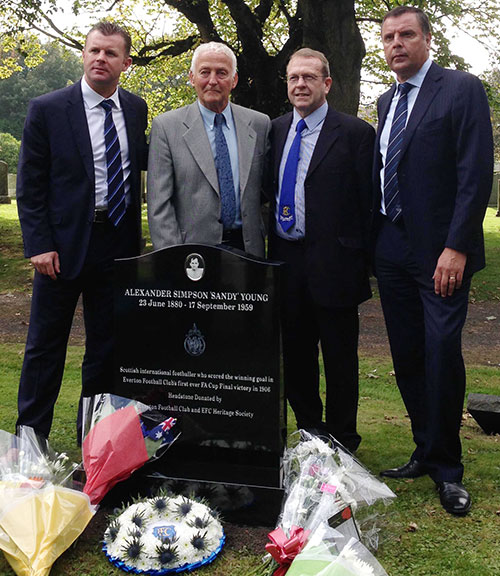 After the ceremony, Paul indicated that everyone was invited back to Hibsâ Easter Road stadium for refreshments.Â  As we all made our way out Graham Stuart and I got chatting to Cathy and Jerry Kelly, now in their 90s who had come through from Glasgow by train and taxi. They are the children of former player, Jeremiah Kelly (1927-29), and it turned out that Jerry had been born in Goodison Avenue. Â I gave them a lift to Easter road, which proved quite easy to find with a bit of help from Dave Prenticeâs (of the Echo) sat nav in the car in front. 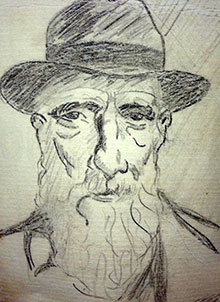 Having dropped off the Kellyâs at Easter Road and parked I wandered in via the main entrance where I caught up with my sat nav guide.Â  Dave produced a copy of a sketch of Sandy in his later years that one of the family had given to him. Â The Echo photographer took a shot of it and I managed to get one too.

On our arrival in one of the lounges, which provided a magnificent view of the pitch, we were greeted with a display from the Heritage Society of memorabilia particularly relevant to Sandy.

The members of the Heritage Society were in their element explaining the provenance of all the memorabilia on display to the Young family. Â Paul explained to the media about the exhibitions at St. Lukeâs Church before each home game, including away fansâ features that many thousands of supporters popped in to see throughout the season.

On a personal note, I have now held a 1906 FA Cup Winners medal in my hand, Iâve touched the Pink and Yellow jersey that Sandy wore when playing for Scotland v England and spent a few hours with some great Everton supporters and former players.

Just before I left to beat the Edinburgh rush hour traffic I wandered over to bid farewell to the Club representatives. Â Soon we were discussing life in Scotland and the forthcoming referendum. Â Given there are three Scottish centre forwards still involved with the Club, you can just tell that the daily Scottish/English banter will be immense, especially over the next two weeks! 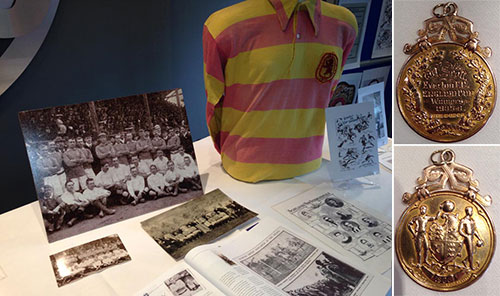 Overall, I got the genuine feeling that this event meant an awful lot to all of the Young family, who seemed thrilled that Sandy was still held in such regard by Evertonians after all this time.

Personally, Iâll remember the day as a relatively low key, dignified event, but one that I think will strike a chord with many Evertonians across the world. Â On the way home I felt that warm glow we get when leaving Goodison after a hard-fought win. Â It is a day I will recall for some time, and felt it worthwhile putting together a few words to share with you all. Â Now back to that VAT return...

It was a very dignified event and something that the young family can gain pride in Sandy's football career. It was the first time that all the different sides of the family gathered in the same place in 100 years so that is a real positive.

It's been a real pleasure with working towards our GOAL in making Sandy have his day in the sun, all the Society members have made a significant contribution to our clubs heritage in this project, sandy will not be forgotten by Evertonians.

Did anyone get footage of the piper playing Grand Old Team? I'm sure that would go down well on here.

Apologies for the shaky camera skills at about 30 seconds. I'd been gently told to get out of the way by the media men.

Thank you for a dignified and moving report.

And, as I said in an earlier post today, so wonderful to see the Golden Vision himself present at the ceremony.

Again, many thanks to Paul Wharton.

"We are Evertonians
We go the match"
(And we never forget Our heritage).

And as has been said above, great to see The Golden Vision there too.

Well done to all in the Heritage Society for this gesture.

Bob Heyward
9 Posted 12/09/2014 at 07:55:36
What a great thing for the Club to do. IÃ’m always proud to be a Blue, but reading a story like that makes me even prouder. Well done to all involved at the Club and the Heritage Society. RIP Sandy.