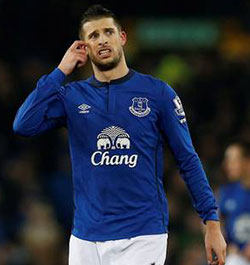 Mirallas started but missed a crucial penalty before going off at half time
Everton's dismal record since mid-December extended to just one win in 13 as they failed to find their way through an entrenched West Brom defence.

Kevin Mirallas' missed penalty shortly before half time was as close as they came to scoring on a frustrating night at Goodison Park that deepens the concerns among supporters bewildered by their team's collapse this season.

Roberto Martinez named his strongest available team for the visit of Tony Pulis' side with fit-again Kevin Mirallas coming in for the suspended Aiden McGeady but the pedestrian opening from the Blues set the tone for an evening that was short on clear-cut openings.

The Blues dominated possession, with the Baggies content to sit back and smother the space around their own 18 yard-box, restricting their hosts to pot-shots from distance that were either blocked or proved routine for goalkeeper Ben Foster.

Mirallas had an early 25-yard effort comfortably caught and saw a 23rd-minute free kick suffer the same fate as the 'keeper anticipated the destination of his direct effort.

Muhamed Besic and Romelu Lukaku would also see efforts charged down before the Belgian tried to bring down Seamus Coleman's cross from the right prompting Joleon Lescott into handling inside his own box.

Mirallas shrugged off calls by Lukaku and Steven Naismith to hand the ball over to Leighton Baines, electing to take the resulting spot kick but then dragged his shot wide to the dismay of the Goodison faithful.

Whether it was due to any resulting fallout over the incident in the dressing room or the hamstring injury that Martinez would cite as a factor after the game, Mirallas did not reappear for the second half. He was replaced by Bryan Oviedo at the start of the second half.

Everton continued to try and pick their way through the visitors' defence as the game wore on but found a thicket of bodies barring their path to goal. Lukaku got free 13 minutes after the restart, though, and saw another shot blocked before Gareth Barry was tripped on the edge of the area and Ross Barkley hammered a deflected free kick through the wall.

Martinez's men would continue to probe and pressure the West Brom defence as the half wore on but with little end product despite a succession of corners. Arouna Kone was thrown on for the last quarter of an hour in place of the industrious and determined Besic but the Ivorian offered little as the Blues ran out of ideas.

Sitting just four points above the drop zone, Everton go into a 12 -day break enforced by their elimination from the FA Cup with plenty to ponder during their warm-weather break in the coming week.