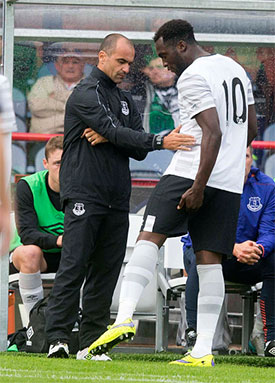 After the early exchanges, it was Watford who took the lead when a cross set up nicely off Jagielka for Layun to fire in. Barkley lashed home a fantastic equalizer after sustained second-half pressure. But Watford snatched a second in a rare foray, Kone replying straight away with a great finish to snatch a point.

Roberto Martinez chose to start Romelu Lukaku in the first game of the new season against Watford after worries about his fitness as the injury list stretched to seven with the addition of Leighton Baines, the others being Hibbert, Gibson, Besic, Deulofeu, Pienaar and McGeady.

Brendan Galloway got the call-up at left-back after impressing last season. New contract signees McCarthy and Mirallas started for Everton. Watford kicked off, playing toward the Gwladys Street end in glorious summer sunshine.

Ross Barkley won the first corner, taken on the right by Mirallas with Stones being impeded by a Watford defender, PrÃ¶dl. At the other end, Galloway covered well to deny Deeney, giving Watford a corner. All the Everton attacks were exclusively down the right, and it was fairly scrappy in the early exchanges.

Watford put Everton under some pressure and it paid off, a cross coming off Jagielka and Layun lashing it in past Howard to put Everton on the back foot after just 14 minutes.

Coleman was finally able to cross, forcing a corner that Barry headed just over, with the help of a fist from Gomes. A corner from the left came to nothing and Everton stalled a little with players static, forcing Barry to hit it long for Lukaku.

Everton tried to work it for a shot from a central position from Barkley but it was solidly blocked Another long ball from Barry fell invitingly for Lukaku but there was too much bounce for him.

Watford were building a solid and seemingly impenetrable defence that picked off any loose ball or lack of accuracy in tight passing, forcing Barkley to wellie one from way far out.

Better play on the left, getting Cleverly involved, let Barkley shoot from an angle, a much better effort forcing a tip-over by Gomes. But it was proving very difficult for the Blues to get a decent sight of goal, with Lukaku getting nothing off Watford's centre-backs, although the big man's woeful first touch was not helping matters.

Everton's old problem of slow build-up play and static passing triangles was allowing Watford the few seconds they needed in transition to set themselves up, and resulting Blues attacks were exhibiting the frustrations all to familiar from last season. Watford pressed briefly after a spell of solid defending and it was ended by a rather nasty two-footed foul by Deeney.

Better forward play saw Coleman finally get some space to cross but it was not good enough for Lukaku to attack, and there were boos from the locals at half-time after a worryingly impotent first half.

Everton showed more desire and intent from the restart, but the quality of crosses in was not quite good enough until Barkley laid one on a plate for Lukaku at the far post but incredibly he missed the target with a very lame header.

Some much better attacks followed but the quality needed in the final third was not there, and Everton needed to be alert for the counter, Coleman getting called for a fair tackle deemed 'from behind': yellow card.

An unusual move by Martinez after the hour, Kone on for Galloway, Barry moving to left back. Cleverley delivered a great ball in for Kone but his header lacked power and direction. Mirallas went down in agony as Behrami came down with a lot of force hard on his right ankle.

Mirallas came back on and played in Coleman for a great cross but neither Kone nor Lukaku attacked it with any conviction. Crosses continued to be curled in and Kone played one back nicely for Barkley who lashed a fantastic shot into the top corner, to make the scoreline barely respectable going into the final 15 mins of a very frustrating game for the Blues. Oviedo replaced Mirallas.

Everton needed to sustain the better tempo of the second half to secure the winning goal, but the game flagged a little. Oviedo fired in a fantastic cross that Lukaku just watched, while at the other end, Deeney jinked and dodged aside of John Stones to dig out a simple shot that beat Howard all hands down to deliver a further stunning blow.

But in the next Everton attack, a better cross, played on by Kone to Lukaku saw an excellent piece of hold-up play with his back to goal, making space wide for Kone to run onto and slot an excellent shot beyond Gomes into the far corner, giving Everton a second equalizer.

Naismith replaced Lukaku for the 5 mins of added time, and Kone almost fed him a great ball as Everton pushed hard for the winner but it was Watford who finished with a flourish that underline the trouble they had caused Everton with another season opener ending in a 2-2 draw against a promoted side.