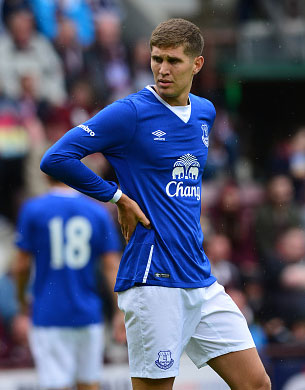 John Stones bemoaned the Blues' misfortune in yesterday's defeat to Manchester United and insists that Everton have the players and the work-rate to pull themselves out of their current slump.

The 21-year-old returned to the starting XI as Roberto Martinez took his side to Old Trafford and, the game's only goal aside, he looked assured at the back after playing 90 minutes for England in midweek.

Everton still lost in hugely disappointing fashion on the back of an ineffective attacking display but Stones attributed the third successive Premier League reverse more to luck than anything else.

“There were a lot of unlucky things that happened to us today,” Stones told evertontv after the game. “The goal was one of them. Before that, I didn't think they had a spell in the game where they looked like they were going to score.

“We hit the bar and had chances to win the game but the things that are going wrong are costing us.

“You've got to take some positives. Defensively, I thought we looked strong, except for the goal which crept in at the back post. Going forward we should be confident that we can bring this [defensive] performance to the table week in and week out, then go out to express ourselves and score goals.

“Some things you can't put right, like luck, but the things we can control we need to work on in training. We have got the players and have got the work-rate. We've showed it this season that we can do it, so we need to look in the right direction.”


Clive Mitchell
1 Posted 04/04/2016 at 20:23:13
It's not luck. It's a remarkable lack of desire, commitment and unbreakable determination to win. I'm not describing the causes, just what you can see in front of you when we're 'performing'. Yesterday's outing was pathetic.
Brian Williams
2 Posted 04/04/2016 at 20:25:15
We may (or may not) have the players to get us out of the slump but we DON'T have the workrate at all. Lacklustre, lacking in enthusiasm and effort. Lacking in everything required to get us out of a slump.
Paul Birmingham
3 Posted 04/04/2016 at 20:28:47
In football as in life, you make your own luck. Stones did okay yesterday, but to bemoan again lack of luck, after the horse has bolted, in my view says we had no game plan and no recovery plan when we went 1-0 down.

It's the same every other week, and also says as Baines today has inferred today, that the players have little or no rapport, which shows most weeks when they play, like lads turning up for school boy trials, relative strangers, not giving two hoots and lose their bottle when it's most needed.

Gagging order needed for Martinez and all players! Make it stop please!

Leighton and Seamus have not become bad players overnight. They attacked at every opportunity, now they rarely cross the half way line. Get off their backs. They were both touted for high-profile moves, but stayed. Ask yourself why? They have had the stuffing knocked out of them. You get one guess why!!

Kevin Mirallas, short fuse, why? Frustration, above average player stifled through lack of opportunity. Wonder what he thinks of Roberto? Probably unprintable!

Eventually Robles got his chance, however, he should have taken Tim's place very early in the season.

In short, don't blame the players for the mess we are in. No Plan B, no idea how to make a team out of a squad of talented players.

Barry Jones
15 Posted 05/04/2016 at 01:55:26
Stones was fabulous and the defense looked very solid throughout, apart from the goal, as Stones noted. I like Stones a lot. He is total class, both defensively and going forward and he should not get the amount of negative comments that he gets on here. If anyone thinks that Funes Mori is on a par with Stones then they are deluded.

In this piece I think that Stones is saying that Everton have quality defenders and we should recognise that. I do. I just do not trust the coaching that makes a top quality back four look susceptible week in and week out.

The Manure goal should not have been. Seamus should have cleared it to the right - in the direction he was facing. It was a mistake. It was not bad luck.

At the other end, we failed to score. Was this bad luck? I think not. A lack of some good luck, maybe.

Once Gerry was taken off we seemed to go back to the way we played against Arsenal. He was quieter in the second period but.... still with the skill and desire to set up something. So, why sub him?

Bob, I think it was Gary Player who said "The more I play, the luckier I get."

Christine Foster
21 Posted 05/04/2016 at 10:02:54
I thought Stones had his best game of the season, seemed to make more right calls with distribution and knew when to stick or twist. Well done. But luck is generated by having the right motivation to be in the right place at the right time. You make your own luck if you are switched on and believe in yourself. Too many on Sunday are just not there.

Despite what many think I thought the team hassled, chased down and played well for an hour on Sunday, Lost a goal and the heads dropped and the hassling of opponents stopped. From that moment the motivation to fight and any hope of a fightback went out the window.

Lennon was lost, Barkley wasted, Lukaku on his own for like 90% of the game, Cleverley started well but faded badly, McCarthy faded from the first whistle. In short, the back four played well, the midfield stuttered and the forward(s) had no service. The Engine of the team needs fixing not fine tuning.

We have three or four players who cannot last a game chasing everything that moves, midfield has gone after an hour... no legs and no replacements. Barry, as good as he has been, can only last an hour doing what we do, McCarthy even less, Wing backs?? Take your pick... all of them are getting dragged into the mire chasing back covering in midfield for Barkley, McCarthy and Barry.

Replace the engine, keep defenders the right side of the halfway line and support the man up top... pretty simple really.

Should send that to Finch Farm defending dept.

Jim Hardin
28 Posted 05/04/2016 at 17:17:13
Barry, Argentina-Chile game. Watch Funes-Mori and tell me upon what you base your opinion at this stage of each's respective development. Then, to get a second opinion, watch the English friendly.

I thought the same thing. I played it back several times and Stones wasn't marking anyone as no Man Utd. player was near him. He stopped inside the six, near his goal line, and as the wide player took it to the end-line, he didn't adjust and stood facing his own goalkeeper. If he had just turned sideways or facing out it was an easy clearance.

It looked like Coleman also thought Stones was going to get it instead of letting the ball run to the back post. Doesn't excuse Coleman for letting the player run by him or for trusting that his center back would make the clearance but it again shows the little things not being drilled into these players about defending.

Martin O'Sullivan
29 Posted 05/04/2016 at 18:29:07
It's not a current slump. It is now two seasons of a great bunch of players underachieving due to the tactical stupidity of Martinez.

Sick of the "this could be the turning point" or "we were unlucky and played well" it is now two seasons of stupid positive spin on a team who have clearly had enough of him. I too would be sick and tired if my boss constantly told me to do what he wants his way and it wasn't working or showing signs of working!! Just bonkers!!

Brian Murray
30 Posted 05/04/2016 at 19:32:40
Them two lads who want us to get beat are no worse or better blues than the rest of you. They are just hurting badly that yet another clown is running our club with a free pass from misty-eyed Bill.

I'm 53 and if I was younger I would know no better than nearly men Bingham, Lee, Moyes etc, but I have seen what a bit of vision, nous and ambition can get us until them shiesters got us banned.

You have heard this tale a million times but it doesn't go away until Moshiri grabs us kicking and screaming away from the inept lethargy that's ran through the club since the Catt's ticket went.

Brian Porter
31 Posted 05/04/2016 at 23:40:11
Well said, Jim Hardin. Funes Mori was superb for Argentina against Chile playing in a properly coached and organised defence in what was an important World Cup qualifier for Argentina, not a meaningless friendly.

It has to be said, I doubt John Stones would get anywhere near selection for the Argentine team. For me, Funes Mori is far closer to being an international class defender than Stones at this stage of their respective careers. Stones is rather over-hyped and has a lot to learn.

The problem is, Funes Mori cannot play his natural game under Martinez and Stones will never truly fulfil his potential playing for Martinez either. We have two potentially top class defenders who are having their best attributes coached out of them by our numbskull of a manager.

As for your performance, John, spot on. MotM by a mile. You obviously decided to concentrate on basic defending and concentration. Plenty of time to develop your ability on the ball,make sure you are selected by getting the defensive side of your game prioritised.

Your display was the best I have seen you for a long time, exactly what we need with the semi coming up.

Listen to the fans who understand that a defender has to defend first ball playing ability, which you have in abundance can come as you develop.

Don't be swayed by the fans who comment along the lines of "we conceded 3 goals there but did you see Stonesy nutmeg the centre forward?"

Far better the performance you gave on Sunday.
Rock solid in defence and excellent on the couple of occasions you stepped into midfield.

Anto Byrne
35 Posted 07/04/2016 at 14:55:10
Its been a whole season of misfortune and bad luck. Unlucky not to win all those games we lost or drew. Just pure bad luck. I think Leicester have had all the luck this season they have to be the luckiest team in the Premier League.

So if you want to be the top side you have to have lots of luck. So we have to start with a lucky manager and we need lucky players. We have supporters who are lucky to have Everton.