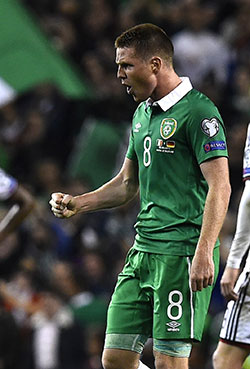 James McCarthy won't play in the Republic of Ireland's friendly against the Netherlands on Friday but manager Martin O'Neill says he should be fit for Euro2016.

The Everton midfielder is dealing with a calf injury and hasn't trained with the Irish squad this week but scans of the problem haven't turned up anything serious.

McCarthy will get another chance to be involved in a warm-up game when Ireland take on Belarus next Tuesday but O'Neill says he expects to name the 26-year-old in his squad for next month's tournament in France even if he sits that friendly out as well.

"If James doesn't play in any of the two games, but feels that's all it is — the scans have been pretty clear — yes, I think James has done enough to be in the 23.

"He's been a major part of proceedings and that would be a type of situation that I would certainly look at and feel, well, if this is just an injury that just needs a little bit of extra time, and he has played a lot of games for Everton.

"I watched him recently when he played very well against Watford, scored a goal and scored another goal in recent times - not just that, but his overall performances were fine and he has had a run of games - then perhaps those extra couple of days might do him the world of good.

"That's the situation. What I wouldn't like is to be going in with two or three players whose fitness has been a concern, not just over a day or two, but over a period of time."


Mick Davies
1 Posted 26/05/2016 at 23:02:05
Another player forced to play while injured by our so called ex 'manager' who was allegedly a physio! God knows how many players careers have been damaged and how many points it cost us when we had plenty of options.
Kieran Kinsella
2 Posted 26/05/2016 at 23:13:56
I'm hoping McGeady does enough to convince some mug to relieve us of his services.
Les Martin
3 Posted 27/05/2016 at 08:51:59
I am interested to see how McCarthy shapes up in the Euros, as this season he has been very average for us, and I really don't know what he brings to the table. I harbored hopes that he could become another Roy Keane type but get the impression he was over-hyped (nothing new) by our ex boss.

At this moment in time, I would not want him in our midfield as he is not good enough. I would sell... but come on and prove me wrong.

Last I was aware, the FA (that highly respected fount of medical research) hands out "Physio" badges after a six week course.
Participants are expected to attend with their own sponge, bucket and "Fiery Jack". Pliers, chisels and wrenches are recommended and discounts are available to those who successfully complete all six half hour sessions.

Judge for your self.