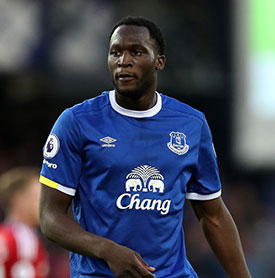 The Belgian scored the fastest Everton goal for 15 years when he curled a m magnificent effort around Artur Boruc with just 30 seconds on the clock and scored three more times as the Blues put paid to the Cherries' second-half rally.

Everton led 3-0 with less than half an hour gone with a mixture of scintillating forward play and ruthless punishment of Bournemouth's defensive frailties but had the home faithful on edge with 20 minutes left after Josh King's doubled had brought memories of the debacle at Vitality Stadium in November 2015 flooding back.

That game would end 3-3 but this time the Blues powered back and had restored their three-goal advantage by the final whistle thanks to Lukaku and Ross Barkley.

Ronald Koeman had hinted at changes to the team that started at Stoke in midweek and, as expected, he reverted to a conventional back four, dropping Mason Holgate to the substitutes' bench. Ademola Lookman was handed his first start in another anticipated move but less expected was McCarthy's name on the team sheet along with that of Gareth Barry while Tom Davies and Idrissa Gueye were named among the subs.

McCarthy took just seconds to more than justify his inclusion, picking up Morgan Schneiderlin's interception and playing Lukaku in with the outside of the boot for the striker to finish brilliantly from just inside the 18-yard line.

Lookman then went close after eluding Harry Arter with lovely footwork on the edge of the penalty area before dragging a shot across goal.

It was the visitors who assumed the lion's share of possession as the first half progressed, however, looking for a way back into the game. They were handed another big set-back though when Lukaku wriggled his away along the byline between two Bournemouth defenders and cut the ball back in the direction of Schneiderlin. The Frenchman couldn't reach it but McCarthy stabbed a shot that cannoned off the man in front of him, bounced off the Irishman's shin and bobbled past the prone Boruc to make it 2-0.

And it was 3-0 five minues later when Simon Francis handed the ball straight to Lukaku with a suicidal pass inside his own box and the Everton striker scooped it over the goalkeeper with aplomb.

Coleman then stung Boruc's palms with a powerful shot two minutes before the break while Joel Robles was called upon to make his first real save in first-half stoppage time to deny King with a decent stop.

Everton's start to the second half was a little ponderous, with complacency creeping into their play but they were inches away from make it four in the 52nd minute when Barkley's surging run ended with a strong effort deflecting just past Boruc's right-hand post.

McCarthy, meanwhile, hit a well-struck volley that he fired straight at the keeper but as the hour mark approached, Bournemouth claimed a lifeline when Jack Wilshere dissected the home defence with a pass to King who knocked it past the stranded Robles.

Everton responded immediately but after being picked out in space by Barkley and cut the ball back into his favoured right foot, McCarthy rolled a shot that lacked power, Boruc diverted it away with his foot and Lookman hammered the loose ball into the side netting.

With Goodison becoming increasingly nervy, Eddie Howe's men struck again through King in the 70th minute just moments after Robles had tipped the striker's shot over the bar. From the resulting corner, the ball was worked to Ryan Fraser whose low driven cross was toed in by King.

Having already replaced McCarthy with Davies, Koeman's response was to withdraw Lookman and introduce Kevin Mirallas but it was almost 3-3 two minutes later when Marc Pugh turned inside Schneiderlin but smashed a shot across goal from the angle.

And when Robles palmed a skidding Arter shot wide and then denied the same player with a flying two-handed save, furious boos erupted from the home faithful.

Everton regrouped, however, and their superior firepower would tell in the final 10 minutes plus injury time. First, Lukaku played Coleman in with a reverse pass and finished the Irishman's chipped cross with a cushioned volley.

Then the striker combined superbly with Barkley, racing onto the midfielder's wonderful back-heeled pass between two centre halves and burying a right-foot shot past Boruc.

The Cherries refused to lie down though and they carved Koeman's defence open again in the 90th minute, Arter playing a one-two exchange with Benik Afobe, picking up the rebound after Robles had saved his initial shot with his chest and then bundling the ball in off the post.

Barkley provided the coup de grâce, however, when he was sent into the clear by Ramiro Funes Mori's raking pass down the centre, the 23-year-old impudently celebrating to the Park End before slotting into the empty net.

The win, Everton's fourth in a row at home in the Premier League, brings them to within two points of Manchester United in sixth place, although the Red Devils have played a game less.