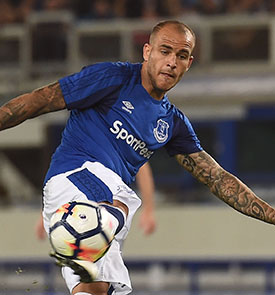 Everton's wait for a Premier League victory at Stamford Bridge continues as they were comprehensively defeated by Chelsea.

Goals by Cesc Fabregas and Alvaro Morata gave the half-time score an ominously familiar look in a fixture that saw the home side win 5-0 last season and one in which the Toffees haven't won in the Premier League for 23 years.

More concerning for Ronald Koeman was the meek manner in which his side went about their business, offering almost no attacking threat and no shots on target in the 90 minutes.

Indeed, until sporadic forays in the second half when the contest appeared to be done and dusted even though the visitors were only 2-0 down, Everton barely tested the Champions, with Thibault Courtois forced into a single save late on from Idrissa Gueye.

The Toffees were playing their third game in the space of six days but despite Morgan Schneiderlin's suspension and Davy Klaassen being ruled out with injury, only half of Koeman's side had started in Split on Thursday.

Gylfi Sigurdsson made his full Premier League debut in an Everton jersey while Sandro Ramirez was passed fit to start only his third game since joining from Malaga over the summer but there was precious little in attack from the Blues in a first half in which Chelsea coasted to a two-goal lead.

Antonio Conte's men had signalled their intent in the early going, Pedro testing Jordan Pickford with a couple of low efforts and Willian seeing a shot deflect behind off Phil Jagielka, before they took the lead in the 27th minute.

Fabregas attempted a one-two exchange with Morata that, with the benefit of fortune came off when the striker nodded forward to his compatriot who beat Pickford with a shot into the far corner.

Five minutes before the break, the home side doubled their lead. Working the ball along the edge of Everton's box, they eventually moved it wide where a César Azpilicueta cross from the right picked out Morata to head home unchallenged.

Koeman responded to a toothless first-half performance by replacing Tom Davies with Muhamed Besic but the pattern of the game remained the same until five minutes after the break when Everton fashioned a chance. Wayne Rooney slipped Sandro in behind the home defence but his scuffed shot was blocked.

The Spaniard was withdrawn in the 62nd minute in favour of Dominic Calvert-Lewin which gave the Blues a bit more presence up front and it was the youngster's pressure that eventually yielded a good chance for Rooney but he mis-hit his shot.

Ashley Williams went close with a late shot that dipped over the bar and then a glancing header that missed before Gueye was foiled by Courtois but it was an otherwise flat showing from Everton who were beaten for the first time this season.