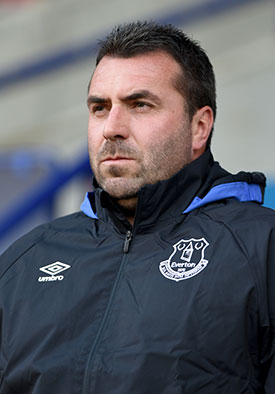 The post-Koeman era begins in one of the toughest arenas possible as David Unsworth takes charge of Everton's Carabao Cup Fourth Round tie against Chelsea.

Handed the temporary reins following the Dutchman's sacking on Monday, the former Toffees defender appears determined to use the undetermined number of games he will oversee as his interview for being appointed to role on a permanent basis.

Unsworth would surely have wished for an assignment more akin to the last time he was installed as caretaker boss when his main remit was simply to put a smile back on the players' faces, send them out with a spring in their step following weeks of anguish under Roberto Martinez and win against already-relegated Norwich City.

In the 44-year-old's favour, however, is that barring another humiliation like the one suffered at Stamford Bridge under Koeman in the Premier League last season, he has very little to lose. Even accounting for the potential of the unpredictability of the cup, few expect Everton to beat Chelsea on their own turf which means that if “Rhino” can motivate his charges sufficiently to spring a surprise, he will have instantly transformed the mood in the camp.

It's not beyond the realms of possibility. Chelsea have already lost at home to Burnley and, more predictably, Manchester City and been run very close by Watford who probably deserved better than to lose 4-2 on Saturday. The Londoners' last away game was a 2-1 defeat to Crystal Palace who hadn't scored a goal up to that point and, of course, they conceded three to Roma in the Champions League… although Everton can only dream of what might have been had they been able to tempt Edin Dzeko to Goodison over the summer.

Unsworth will look to combine the post-sacking “bounce” factor with his own designs on how the Blues should line up and play to try and match Chelsea's technical superiority and see how things play out. In that respect, his team selection will be an interesting one and, naturally, a hard one to predict.

While Wayne Rooney's status as an automatic starter was increasingly challenged towards the end of Koeman's reign, it's hard to see Unsworth not making him a focal point of his line-up for this one given the 32-year-old's vast experience and ability to score at crucial times.

Whether that's as a central striker or playing off the likes of Dominic Calvert-Lewin remains to be seen but Unsworth's close working knowledge of the Under-23s might also see him blend in a decent smattering of youth, with Jonjoe Kenny likely to get the nod at right back, Tom Davies a strong candidate to start in midfield, particularly given the fact that Idrissa Gueye is suspended, although he would face competition from fit-again James MCarthy, and Nikola Vlasic could be rewarded for his strong performances, albeit perhaps encouraged to play more wide than he did under Koeman.

Beni Baningime and David Henen, who trained with the first team on Tuesday, might not get a look-in in this cup tie but their inclusion is a sign that the stand-in boss won't be afraid to use younger players to help freshen up the team.

With few permutations to be sorted through at the back, it's in attacking areas where Unsworth's starting XI will be most interesting. Will he accommodate Gylfi Sigurdsson in a central role and perhaps use Kevin Mirallas wide on the left or could he drop the Icelandic international in favour of using Calvert-Lewin as a striker off Rooney instead?

Thanks to the possibility of extra time and penalties, of course, Unsworth doesn't have to engineer a win inside 90 minutes and could bank on a more attritional strategy whereby an extra time winner or the lottery of penalties could seem them through.

There is precedent as all Blues will remember. Everton haven't won at Stamford Bridge in the league since 1994 but they did best Chelsea on spot kicks under David Moyes there in 2010. “Rhino” would take that outcome again in a heartbeat.