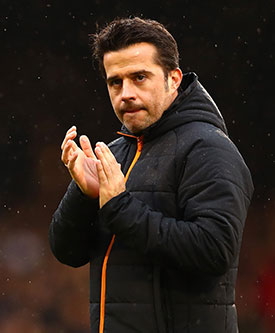 Watford have reportedly rejected an approach today from Everton for their manager, Marco Silva.

There has been plenty of noise around Silva being a good fit for the Blues as a permanent replacement for Ronald Koeman and after newspaper reports claimed yesterday that the Hornets have told them that they would not sanction any talks between the two parties, a spokesman has confirmed the "hands off" warning.

“We will not countenance an approach for our manager, either from Everton or indeed any other club, be it in the Premier League or abroad,” the representative told Sky Sports on behalf of Watford.

Silva only joined Watford this year having been approached by the Hertfordshire club based on his close brush with success at keeping Hull City in the Premier League last season.

That hasn't prevented media talk linking the Portuguese with the Goodison post but there are conflicting reports over whether he would be interested in the role. The Times say Silva has informed the Blues that he is not interested in leaving Watford but The Independent's report suggests the opposite if a compensation package could be agreed.

There is no release clause in the 40-year-old's contract which would put the onus on Everton to come up with a big enough offer to persuade Watford to let him go.

As a result of the Hornets' stance, Sky Sports are reporting that the Blues have dropped their interest in Silva and have also seen the chances of Sam Allardyce taking charge until the end of the season recede.

They suggest that Allardyce is not sufficiently interested in a short-term role and that it would take a longer-term option to tempt out of retirement.