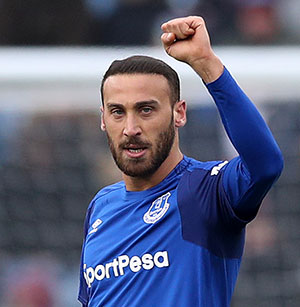 Everton eased the pressure on Sam Allardyce and the lingering fears of relegation with a fairly comfortable 2-0 win over Brighton that saw Cenk Tosun score his first Goodison Park goal.

The Turk swept an excellent strike into the top corner via the underside of the crossbar to set the seal on what was the Blues' third successive victory at home but only their third in 12 Premier League games.

Earlier in the second half, Gaetan Bong had put through his own net as Everton were finally able to press home their superiority and only an excellent stop from Mat Ryan denied Wayne Rooney from making it 3-0 late on from the penalty spot.

Having overseen two poor away performances, Allardyce would have been under no illusions about the importance of three points against the team that sat above his team in the table coming into the weekend. The manager was forced to change his planned line-up on the day, however, after Idrissa Gueye and Morgan Schneiderlin succumbed to illness.

Allardyce felt confident enough to deploy Rooney in a more defensive role alongside Tom Davies in midfield and two wide men in the form of Theo Walcott and Yannick Bolasie, his cause aided by the returns to the line-up of Phil Jagielka and Leighton Baines.

The home side might have been expected to carry the greater threat but the extent of their dominance, particularly in the first half, was surprising. Yet, despite forcing a slew of corners, Everton struggled to create clear-cut chances.

Seamus Coleman had the best of them in the first period as early as the third minute but he dragged his shot across goal while Yannick Bolasie almost diverted a 22nd-minute corner inside the back post with an out-stretched leg.

Brighton had barely been in the game from an attacking point of view but they forced the first save from either goalkeeper when Glenn Murray belted one from 25 yards that Jordan Pickford had to parry away with two strong fists.

Back at the Gwladys Street End, which the Toffees had been forced to attack following the coin toss, Davies had a shout for a penalty when he was sandwiched by crunching tackles from Shane Duffy and Lewis Dunk and Bolasie wasted two openings by volleying well over and dropping a header wide.

The second half began as a more even affair but after Rooney's goal-bound shot was diverted wide by Duffy five minutes after the break, Everton broke the deadlock 10 minutes later.

Bolasie, who had had an unproductive afternoon, finally found his range after space opened up in front of him and clipped a cross towards Walcott at the back post. Bong got a shin on it ahead of the Blues' winger and it ended up in the back of the Seagulls' net.

Walcott was forced off by what Allardyce described afterwards as a bout of cramp with 17 minutes to go but any fears of a loss of impetus were put to bed three minutes later. Baines collected Tosun's pass, worked his way nicely into the box and slid a return ball to the striker who finished impressively from around 15 yards out.

Brighton attempted an audacious riposte from the restart when Pascal Gross floated a shot from the halfway line that had Pickford scrambling back to his line before it drifted just over his bar.

But any hope Chris Hughton had of his side springing a surprise comeback was largely ended when Anthony Knockaert was shown a straight red card for an ugly, two-footed lunge on Baines.

And after Davy Klaassen made a rare appearance as a substitute in place of Davies, Rooney was handed the chance to put some gloss on the scoreline when Dominic Calvert-Lewin went down under Duffy's challenge and referee Roger East awarded a penalty.

Ryan guessed right for the spot-kick, however, and made a great save to ensure that it finished 2-0.

The result moves Everton back into the top half and ninth place for the time being and moves them to within three points of the 40-point mark that usually guarantees top-flight safety.