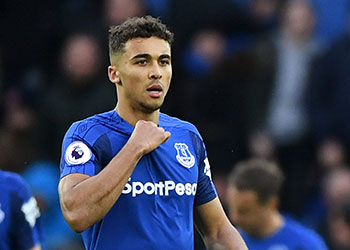 Everton and Liverpool shared the spoils in the second Premier League Merseyside derby of the season as they played out a largely uninspiring goalless draw at Goodison Park.

Both goalkeepers were called to make vital interventions to keep seemingly goalbound efforts out at either end but it was the Blues who almost won it with a late push but were let down by wayward finishing.

It made for a mostly defensive posture for much the game, particularly after Everton's early momentum had dissipated after the first half hour had elapsed.


In that time, Bolasie had come closest to breaking the deadlock for Everton when he knocked the ball wide of his marker and whipped a curling shot towards the far post but Loris Karius managed to get his fingertips to the effort and help it wide.

At the other end, Jordan Pickford had earlier denied Dominick Solanke from close range after the ball had broken to the Liverpool striker in a central position. And the England international 'keeper had to be alert to palm away a bending shot from James Milner.

The game remained tight after the half-time interval with precious little happening for either side in the final third, until reds' substitute Alex Oxlade-Chamberlain drifted past Schneiderlin and blasted over from 20 yards out.

Seamus Coleman then blocked twice to foil Solanke while back down the other end, Leighton Baines found himself free in space on the left for the first time but his cross was just too far ahead of Tosun.

Having already withdrawn Wayne Rooney for Idrissa Gueye and then the increasingly ineffective Bolasie for Dominic Calvert-Lewin, Allardyce replaced Davies with Beni Baningime with 11 minutes to go of the regulation 90, allowing Calvert-Lewin to push further forward in support of Tosun.

With time running out, Theo Walcott jinked past his man and crossed invitingly for Tosun but he miscued his header back across Karius and Coleman couldn't connect with the loose ball in front of goal.

Then, Coleman picked out Calvert-Lewin with a centre from a similar position but the young striker sliced his shot high and wide from a hugely promising position.

The result prolongs Everton's winless run against Liverpool that stretches back to 2010 but it meant that they avoided a derby loss in the league where in this fixture last season they suffered a narrow 1-0 defeat.