Sigurdsson scores but Iceland are eliminated 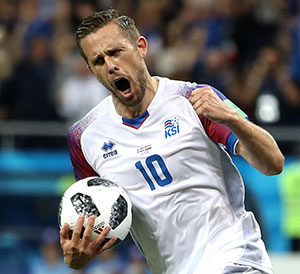 Gylfi Sigurdsson's 76th-minute penalty was ultimately rendered immaterial by Ivan Perisic's winner
Gylfi Sigurdsson scored an equaliser from the spot to give Iceland hope of qualifying for the knockout phase but Croatia ultimately prevailed to top Group D at the World Cup this evening.

The Everton midfielder atoned for his penalty miss against Nigeria to level the match with a quarter of an hour to go, cancelling out Milan Badelj's opener, but Ivan Perisic won it for the Croatians in the final minute.

The Nordic side needed to win and hope that Argentina didn't beat Nigeria by a bigger margin in the other decisive match in the group.

In the end, the Argentines saved themselves with a 2-1 win but it was immaterial as far as Iceland's fate was concerned.

The result ends Sigurdsson's participation in the tournament and ensures that he will play a part in the bulk of the Blues' pre-season preparations after a permitted post-Russia break.