Liverpool-born William Briscoe appears in the Everton line-up having begun his career on Stanley Park during their inaugural season in the Football League. Born the 24 May 1866 he was the second of 3 children born to William and his wife, Ann. The 1871 census finds her, and the 3 children, boarding with the Kelly family at 15 Brisbane Street in Kirkdale where she declares to be a ship steward’s wife. The family later found a home of their own at 75 Windermere Street where William junior, after finding work as a railway clerk, began playing football for the church of St Benedict. The team had been formed by the resident Curate, William Edward Jackson.

Born 27 June 1852 at Blackheath Park in Kent, Jackson studied at the local proprietary college from where he matriculated to Cambridge University at Michaelmas Term in 1874, and was admitted to Corpus Christie College. Jackson later chose a living within the Church of England and, following his ordination at Chester, he was awarded with a Bachelor of Arts in 1877. One year later, he was appointed Curate at the church of Benedict.

Known locally as the “Iron Church” it had been erected to ease the pressure due to the increase in population on the neighbouring parishes of St George and St Saviour. Reverend Jackson had honed his goalkeeping skills while at University and several times he assisted the Everton second X1 in this position. He remained at St Benedict’s until November 1884 and was then transferred to the church of St Andrew at Bethnal Green in London. William Briscoe, following his departure, spent one more season with St Benedict’s, then accepted an offer to join Everton. 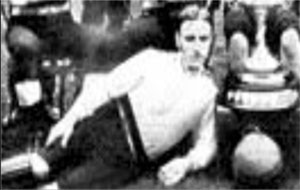 He quickly endeared himself to the Everton supporters when he took part in a 1st round Liverpool Cup tie against their arch rivals, Bootle, at Hawthorne Road. The game produced the largest crowd yet seen on Merseyside, estimated at around 10,000 people, who watched him score the first goal in a 2-0 win. With their main rivals out of the contest, the Anfield club cruised in to the final which took place at Bootle. Briscoe, who was carried off after 5 minutes, collected his first medal as 10 men Everton beat Oakfield Rovers, 5-0. Next season, despite severals new signing, he managed to stay in contention and took part in one of the 4 ill-fated FA Cup ties against Bolton Wanderers which saw Everton banned, for a period of one month, on a charge of “professionalism”. Briscoe, however, had his sentence doubled when he was reported to the Liverpool FA for playing football on Stanley Park and it was mid-February before he returned to Everton who now were in the process of strengthening their squad in preparation for life in the Football League. Briscoe was obliged to begin the season with the second XI before making his debut on the 13 October 1888 against Notts County at Trent Bridge.

The visitors, who began the game badly, where trailing 3-0 when skipper Nick Ross reorganised his team by moving himself into the forward line and promptly scored to reduce the arrears. In the latter stages, the play became rough as the home side held out for a 3-1 win. The Everton players, following the final whistle, were surrounded by an angry crowd and had to be rescued by members of the local Constabulary. William Briscoe then returned to the second XI and was next called up for first team duty on the 20th of December when Everton faced runaway league leaders Preston North End at Deepdale. They were beaten by 3 goals to 0.

William Briscoe played his 3rd and final Football League game for Everton when they travelled to meet Accrington on the Thornyholme Ground. George Farmer failed to arrive at the location so Harry Parkinson, a local player with Bells Temperance, took his place in the half-back line. Everton, after taking an early lead, faded and were beaten 3-1. Briscoe then returned to the second XI and was not retained by the club at the end of the season.

The census, taken in 1891, finds William, along with his younger brother, still living at 75 Windermere Street where his mother is now head of the household. On the 18 September 1895, he married Anne Eyles at the church of St Mary, Walton on the Hill and settled at 58 Roxburgh Street were both his children, William and Mary, were born. William Briscoe continued his employment as a railway clerk and was residing at 35 Margaret Road, Kirkdale when he retired. He had outlived both his wife and son when he died, 20 April 1941, and was buried at Kirkdale Cemetery.