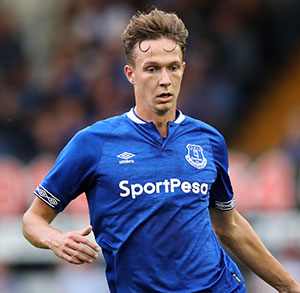 The pair have put pen to paper on deals that tie them to the Blues until 2021.

Connolly joined Wigan Athletic on a season-long loan this week while Dowell, who spent last year at Nottingham Forest, could get the chance to fight for a place in the Everton first-team this season if he does not secure another loan elsewhere before the end of the month.


Fran Mitchell
1 Posted 09/08/2018 at 14:13:42
Hope Dowell stays and battles with Bernard and Siggy for a first team place. Such competition would serve him better than another season in the championship.
Derek Knox
2 Posted 09/08/2018 at 14:14:25
Now that is encouraging, although being a big fan of both, I was very disappointed with Dowell this pre-season, but he has shown enough, prior to recent displays, he can be a part of the future.
Steve Ferns
3 Posted 09/08/2018 at 14:19:28
Not sure 3 year deals are the right length, but Brands will have rubber stamped this. Both look promising and I hope Connolly comes back better and stronger and gets a good run at the first team next pre-season.

Dowell, I hope he's in and around our first team this season. If he's struggling to make the bench, we should also look into loaning him out as well.

Has a sweet left foot and great balance but gives me the impression he hasn't got 90 minutes in him.

Simon Jones
5 Posted 09/08/2018 at 15:06:07
Boss has a few weeks with the season starting to have a look at Dowell before sending him out on loan again. One of the few advantages of the earlier closing of TDD.
Derek Knox
6 Posted 09/08/2018 at 15:12:22
I have just noticed the news that Calum Connolly is to join Wigan for a season long loan, so he won't be featuring till next year.
Ashley Roberts
7 Posted 09/08/2018 at 17:50:43
I am glad we are hanging onto our young talent. Given the new signings I am hoping some of their obvious knowledge and experience will help in their development. The rumour was that Silva was impressed with Joe Williams and so I hope he gets over his injury and maybe Dowell, Davis and Williams can push to become our future midfield trio.
Peter Gorman
8 Posted 11/08/2018 at 19:35:37
Connolly scored for Wigan but they lost 3-2 to Villa.