Silva: Mina will be ready to face Chelsea regardless 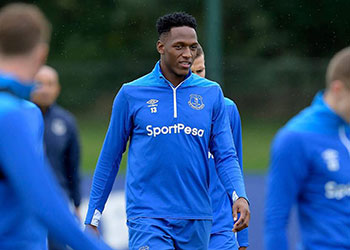 Marco Silva says that Yerry Mina won't necessarily need to play against Brighton tomorrow in order to be ready to face Chelsea next weekend.

On-loan Kurt Zouma, one of Everton's two in-form centre-halves currently keeping the Colombian World Cup star out of the team, will be ineligible to face his parent club at Stamford Bridge and that has led to speculation over what Silva will do by way of preparation.

It had been suggested that Mina could be handed his full debut against the Seagulls at Goodison Park but his manager said that the defender will be ready to play Chelsea regardless.

He also hinted that the midweek friendly against Gor Mahia in the SportPesa Cup might also be a good option for Mina to gain some match sharpness even if it wouldn't expose him to top flight English football before he takes to the field in West London next Sunday.

“It's something [we] already [knew] some months ago, that when it comes to next week that Zouma is not able to play ,” Silva said in his pre-match press conference.

“But, believe me, it is our focus and our way to think is preparing our players to be ready to play.

“And Mina is ready to play if I take the decision. I know how he is working but in our minds stays just one game. It's the Brighton match, nothing more.

“At this moment you don't think [anything] about Chelsea. What I want is all our focus and ambition to be on tomorrow's match, nothing more.

“We have a friendly match next week as well; maybe that could be a solution.”

We are getting better, but we are still way to open, and I don’t see how this is going to change, until we tweak the system?

IF we were to lose to Brighton with Mina & Keane at CB, we'd all wonder what would have happened if he kept Zouma in. Chelsea will be a backs-to-the-wall different game anyway, this weekend is not similar in preparation at all.

The only other way to set up would be a back 3; but he hasn't done that all season

Keep Zouma in, get the three points, worry about Chelski next week.

Bringing Mina on with half an hour to go, depending on the game flow (winning/losing) makes the most sense.

Fran Mitchell
11 Posted 03/11/2018 at 13:32:59
While Keane and Zouma have performed well, we have still been leaking goals. I'm hoping that Mina can come in, for either Keane or Zouma, and raise the bar even higher. Look at the impact van Dijk had at Liverpool, hopefully Mina can have a similar impact.

Also, his presence on set pieces could also make a huge impact, we are poor at set pieces.

Why risk losing to Brighton (a team would should be getting all 3 points – as we did) – because of a game that we are a lot more likely to lose.

Play one game at a time and play your best team every time.

Mina also now comes in for a tough game – which I think is a good thing – he'll have to be fully focused & on it from the word go.