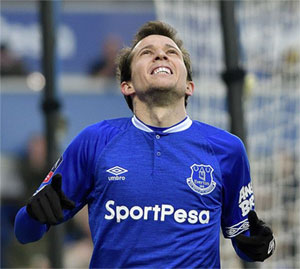 Everton did enough to negotiate their way past Lincoln City at Goodison Park and book their place in the fourth round of the FA Cup thanks to two goals in the first quarter of an hour.

Ademola Lookman and Bernard each grabbed their first goal of the season as the Blues threatened to bury the League Two side but their strong start subsided shortly afterwards allowing the Imps to hit back through Michael Bostwick and ensure that the home team wouldn't be comfortable until the final whistle.

Marco Silva made five changes to the team that started the defeat to Leicester on New Year's Day, handing Leighton Baines a rare start, recalling Yerry Mina, Bernard and Tom Davies and deploying Lookman out wide in place of Theo Walcott.

And in the early going, it looked as though Everton's superior quality would be too much for Lincoln as Lookman flashed a shot barely over the crossbar in just the first minute before the young forward put the Blues 1-0 up in the 12th minute.

An expansive passing move ended with Baines curling a cross to the back post where Lookman looped a header over Josh Vickers and the ball crossed the line as the covering defender tried to keep it out with his hand.

Two minutes later, it was 2-0. Another nice move saw Gylfi Sigurdsson come from deep to play a neat pass to Dominic Calvert-Lewin whose lay-off put Bernard in to dink a composed finish over the keeper.

Lookman just missed with an attempted curler from the left side of the box and Calvert-Lewin was denied by Vickers after a marauding run had taken him around the last man but when Mina's struggles with John Akinde yielded a free-kick for the visitors, it led to Lincoln halving the deficit in the 27th minute.

Jordan Pickford made a point-blank save to deny Jason Shackell's header in front of goal but the rebound fell to Bostwick who couldn't miss.

With his side having largely ceded the initiative over the remainder of the first half, Silva moved to address the situation at half time, withdrawing Davies and Calvert-Lewin in favour of André Gomes and Cenk Tosun.

It would take another 15 minutes before some of the control Everton had exerted early in the first period to return and for Vickers to be properly tested again. Sigurdsson unleashed a powerful shot from the edge of the box that the keeper pushed away two-handed and then, after Gomes had hammered one wayward effort into the Gwladys Street, Sigurdsson collected a one-two pass from Baines but Vickers denied him once more.

Baines had a penalty shout waved away when he appeared to be bundled over in the box but as the game entered the final quarter of an hour and Lincoln became more desperate, Everton's set-piece vulnerabilities made for a nervy conclusion.

Richarlison was forced to header over his own bar after Gomes had been adjudged to have fouled substitute Matt Rhead and Kenny had been forced to knock the resulting free-kick behind for a corner.

Then, after Richarlison had tried to bend a shot in but narrowly missed and Tosun had side-footed a low Baines cross at the keeper, Kurt Zouma had to come across and nip the ball away from Shay McCartan after he had stolen in behind the home defence.

Everton held out for a 2-1 win that puts them in the hat for the draw for the next round but Silva will be pondering more questions from what was an unconvincing display from a team still trying to re-find its feet following a damaging run of form in the league over the past month.