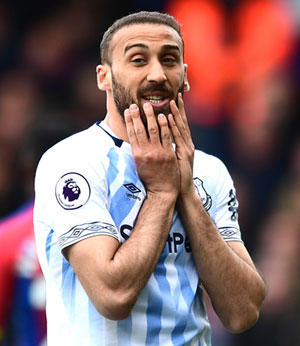 Everton were held to a goalless draw by Crystal Palace at blustery Selhurst Park dealing a significant blow to their hopes of finishing in seventh place.

The Blues prevented the Eagles from having a single effort on target in the 90 minutes but while they twice hit the woodwork themselves, Marco Silva's side couldn't fashion the winner that their dominance of the game deserved.

With Richarlison shaking off the rib injury that necessitated his early departure from last weekend's thrashing of Manchester United, Everton fielded an unchanged line-up and after surviving an early scare when Max Meyer fired into the side-netting, they quickly set about bossing the contest in a manner befitting their lofty ambitions.

The signs that it wasn't going to be their day arrived quickly, however, as Dominic Calvert-Lewin betrayed a hesitancy up front that saw him spurn a couple of good early openings.

The striker capitalised on an error by one of Palace's centre-halves and nipped in behind him as Jordan Pickford's long ball forward bounced through but his first touch let him down and his eventual shot was weak and easily saved.

Another defensive slip almost put Calvert-Lewin in but he just couldn't toe the loose ball past the nearest defender while Richarlison wasted a good chance to break forward when he failed to play Gylfi Sigurdsson in and was closed down.

Everton's superiority in possession led to a number of crosses and a couple of attempted shots being deflected behind but despite earning 10 corners over the course of the game, they failed to unduly test the Palace rearguard with any of them.

And when the visitors did carve out a clear chance for Calvert-Lewin just before the half-hour mark, he could only plant a free header into Vicente Guaita's arms while he put another header over the crossbar, again from a Seamus Coleman delivery from the right a few minutes later.

With Wilfried Zaha well marshalled by the Everton defence, Palace were displaying almost none of the attacking threat that took down Arsenal at the Emirates last weekend but they did put the ball into the side-netting again at the beginning of the second half when James McArthur miscued an attempted shot.

Everton resumed their dominance and came within inches of taking the lead in the 53rd minute when Bernard tried to fire the ball inside the upright but his shot appeared to take the merest of deflections that took it onto the base of the post and out of the Palace goal mouth.

Calvert-Lewin was replaced by Cenk Tosun with 17 minutes to go and the Turk would go as close as anyone to breaking the deadlock less than five minutes after taking the field. Once again Coleman was the provider from the byline down the right flank and though his cross was behind Tosun, the striker tried an audacious back-heel that Guaita saved superbly from point-blank range to save his team.

Ademola Lookman and Theo Walcott came on for Bernard and Sigurdsson in the closing stages but it was Lucas Digne who almost inadvertently scored when his cross nicked off his marker and bounced off the far post and back into play before the ball was cleared.

It was not to be Everton's day, however, and with Wolves winning at Watford to open up a four point lead over the Blues with two games left, it would appear to be a tall order for Silva's men to claim seventh spot and have any chance at a crack at the Europa League for next season.

Everton can close the gap by beating Burnley at Goodison Park on Friday but Wolves face Fulham next weekend knowing that, depending on how Leicester fare against Arsenal tomorrow, a win would secure them the mantle of "best of the rest".