Kean vows to prove himself at Everton 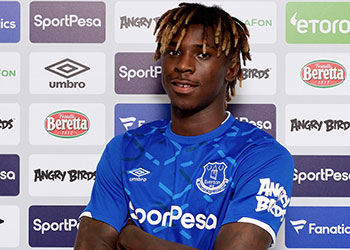 Moise Kean says that he is ready to bring the experience he has gained from playing at Juventus to Everton so he can repay the club and the fans for the warm welcome he has received so far.

The Italian striker, a £25.1m acquisition from Juventus in what has the potential to be one of the coups of the summer, was moved by Director of Football, Marcel Brands's gesture to his mother in giving her a shirt with her son's name and number on the back, personalised with “Mami” on the bottom, together with a commitment that Everton will look after her son, particularly following some of the racism Kean suffered recently in a Serie A game against Cagliari.

“I've been enjoying my first few days very much,” the 19-year-old said during his first official press conference at Finch Farm earlier today. “The team is a family and I'm very, very happy and feeling very well.

“It has been a very emotional time, it was a great gesture [from Brands] and I've felt at home straight away.”

In addition to Brands's assurances, some Everton supporters have offered their own welcome to Kean by raising money to create a banner in support of the player's fight against racism.

Kean promised to respond to the fans's gesture on the pitch, saying: “That is beautiful because racism is horrendous. We have to fight hard against racism and I'm going to repay the fans for all they do for me.

“I'm feeling even more motivated and more willing to repay them. I'm training at 100 per cent of my ability and giving the maximum I can.”

Kean stressed that his decision to come to England had nothing to do with the incident at Cagliari or any fears of further race-based hostility he might endure playing in Italy. Instead, he says he was attracted by Everton's ambition.

“No, I like Everton, that is the reason [why I came],” he said. “Everton is looking ahead, like me, to the future so I see myself in this team. I want to play, I want to prove myself and give 100% of my ability.

“The staff is very, very good, the team is exceptional. They've accepted me as a companion and I'm very grateful. I'm going to repay them by giving 100 per cent of my skill and ability.

“The objective of the team is to get as far as possible. For me, personally, I am a striker so my objective is to score goals, as many as I can — seven as a minimum, but I can score more!

“I've had the benefit of playing with some of the best players, like Cristiano Ronaldo for instance, so, of course, I have learned a lot. I'm bringing everything with me.”


Michael Lynch
1 Posted 06/08/2019 at 19:27:28
Seven goals! I hope he's joking! Really looking forward to seeing Moise in action, hopefully when we beat Watford 4-0 with him scoring the first of his seven
Martin Berry
2 Posted 06/08/2019 at 19:32:47
Lets be clear he is 19 and moving to the most competitive league in the world so lets not expect miracles just yet ok ?
The young man has great potential, lets be patient and see him grow into an Everton legend
David Pearl
3 Posted 06/08/2019 at 19:55:19
Tell you what he looks something else in the video of him training released on YouTube

Nice to see Coleman with his arm around him. Lets hope he settles in nicely. Might not be easy as I'm not sure we have any other italian speakers in the squad.

Kieran Kinsella
4 Posted 06/08/2019 at 19:58:30
He probably looked at DCL, Tosun, and Niasse's records and thought "Damn this league must be hard but I'll shoot to do one better than them."
Alan Brown
5 Posted 06/08/2019 at 20:03:25
Is there a link to fundraising for the banner? absolutely brilliant
Brent Stephens
6 Posted 06/08/2019 at 20:07:32
Yes, as Alan says, a link would be welcome to contribute to that banner. I detest racism with every cell in my body. Nice touch by Brands, here.
Lyndon Lloyd
Editorial Team
7 Posted 06/08/2019 at 20:08:59
As requested, I've added a link to the article above. Nice initiative.
Brent Stephens
8 Posted 06/08/2019 at 20:10:04
Thanks, Lyndon.
Kieran Kinsella
9 Posted 06/08/2019 at 20:16:33
Yes, interesting to juxtapose the "welcome" and reaction to racism at Everton versus Zenith St Petersburg. That said, it wasn't always so -- sadly remember poor old John Barnes being abused in the 80s but hopefully, as that portion of Everton "fans" have learned and changed so hopefully Petersburg fans will eventually.
Ray Roche
10 Posted 06/08/2019 at 20:34:00
Kieran, unfortunately racism was rife in those days. Barnes actually suffered racist abuse at Anfield before he joined the RS and I remember some oaf phoning Radio Merseyside, to complain about his signing, and began a racist rant before being cut off. Happily those days are pretty much behind us.
Mike Andrews
11 Posted 06/08/2019 at 22:42:31
Ray, I really, really wish they were but they aren't. The politics of the last 3 years has allowed closet racists and xenophobes to feel their odious attitudes are mainstream again.
I am genuinely heartened to see the banner initiative.
On a completely different note, I was very confused by the video of Brands giving the shirt to his Mum. Not the gesture, which I thought was an extremely thoughtful touch, but, given our boy was born and brought up near Turin and is an Italian national/international, how come the translator was doing it in French?
Peter Gorman
12 Posted 06/08/2019 at 22:45:28
Probably for his mother's benefit, Mike - she is from the Ivory Coast.
Peter Gorman
13 Posted 06/08/2019 at 22:45:28
Probably for his mother's benefit, Mike - she is from the Ivory Coast.
Mike Andrews
14 Posted 06/08/2019 at 22:50:24
Ahh! Thanks Peter. I hadn't checked that but guessed something similar. It just sounded a bit weird!
Colin Glassar
15 Posted 06/08/2019 at 22:58:29
David, the lad speaks French, so he'll be ok with Digne and Zouma (when he gets back).
David Pearl
16 Posted 07/08/2019 at 01:19:41
Oh that's good Colin. Level headed, mature and ambitious, and at 19. Think he will do well with Siggy.
Gbamin doesn't look too shabby either.
Clarence Yurcan
17 Posted 07/08/2019 at 02:55:39
Moise will go down as an all-time great goalscorer
Jack Convery
18 Posted 07/08/2019 at 02:55:51
Allez Le Blue or something like that I think it goes. A new one for the St End me thinks. This kid sounds like the bizz to me - mature, eloquent, well mannered, prepared to stand up for what he believes to be right - could have been born a blue. Welcome and here's to your first magnificent 7.
Mike Gaynes
19 Posted 07/08/2019 at 03:22:22
What a response to the fundraiser for the banner!

I'd describe that in one word.

Apparently Dan Meis got the ball rolling with 𧶀. Generous donation, but also a nice move in terms of generating publicity for it at the very outset.

Tony Everan
21 Posted 07/08/2019 at 11:45:37
The banner is a great idea and shows the uncompromising solidarity of the club and fans with regards to not tolerating racism. We will all be right behind Moise at Everton.

I will be donating a few quid towards it.

Tom Roberts
22 Posted 07/08/2019 at 20:49:08
For me, this is the most exciting signing since Andrei Kanchelskis. I cannot wait to see the lad banging in the goals for us for years to come. Hopefully at the new stadium as well.