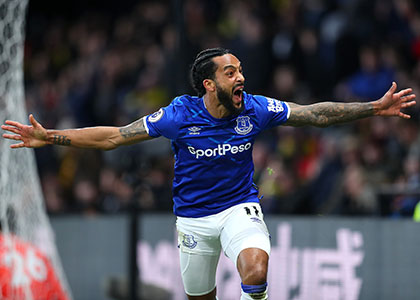 Everton produced an impressive comeback to recover from going 2-0 down to beat Watford despite playing the last 20-odd minutes with 10 men at Vicarage Road.

Theo Walcott netted a dramatic injury-time winner to break the Hornets' hearts after two Yerry Mina goals had erased the advantage they had built heading into the half-time break through Adam Masina and Roberto Pereyra, while Fabian Delph was sent off for two bookable offences.

Carlo Ancelotti made three changes to the team that started the draw with Newcastle, moving Bernard, Morgan Schneiderlin and Moise Kean back to the bench, restoring Richarlison to the attack, Gylfi Sigurdsson to central midfield and deploying Alex Iwobi, now fit following a hamstring injury, for the first time since taking over as the Blues' boss.

It was Watford who started the stronger and more coherent of the two teams, though, and they took the lead just 10 minutes in. Gerard Deulofeu took advantage of space on Everton's right side to set up Masina to rap home a well-worked goal from just inside the penalty area.

With the home side winning the battle in midfield, Everton couldn't make much headway for the first 45 minutes and Jordan Pickford had to play sweeper-keeper to snuff out a dangerous situation before Abdoulaye Doucouré over-head kicked well over with half-an-hour gone.

In between, Dominic Calvert-Lewin had headed into Ben Foster's arms to register a rare effort on goal from the visitors who fell further behind three minutes before the interval.

Delph gave the ball away to Troy Deeney in front of his own box and the striker laid it off to Pereyra who belted it past Pickford to make it 2-0.

Everton looked to have given themselves a lift for the second half when Yerry Mina bundled the ball in following a corner on the stroke of half-time but, in three further minutes added on, the Colombian doubled his tally to completely transform the outlook of the second half. Sigurdsson swung a deep ball from a corner to the back post where Mina easily out-jumped Craig Cathcart to head home the equaliser.

The Blues responded well to their unexpected parity by upping both the tempo and their intensity in midfield and a free-kick from the right almost ended up in the net but ricocheted off a defender's head and just cleared the crossbar.

However, when Lucas Digne sold Delph short with a poor pass, the former Manchester City man fouled Pereyra at the other and was booked. Then, after Digne had struck a direct free-kick into the wall at one end, Delph chopped Etienne Capoue down with an innocuous tackle and was surprisingly shown a second yellow card.

Having already brought Kean and Schneiderlin on for Iwobi and Sigurdsson, Ancelotti made his last change in response to his side going down to 10 men, withdrawing Calvert-Lewin and introducing Michael Keane.

Watford were never able to make the extra man count, though, and they were picked off as the game moved into added time, with Richarlison bursting down the left flank and playing a dangerous ball into the area.

Kean appeared to scuff a left-foot attempt that ended up being a terrific assist as the ball skidded on to the far side of the goal where Walcott arrived to tuck it home and send the travelling Blues behind the goal into delirium.

Unlike their late collapse against the Magpies last time out, Everton played out the last few minutes in relative comfort and composure to record their first victory after going behind in more than two dozen attempts.