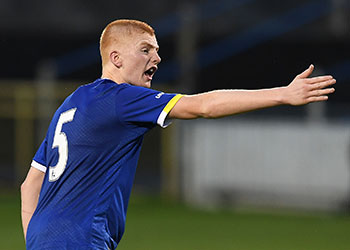 Everton are concerned that Under-23s defender Morgan Feeney will miss the rest of the season after he suffered what appears to be a serious hamstring injury.

The 20-year-old had to come off the field in stoppage time at the end of the first game of his loan spell with Tranmere Rovers on Saturday and has now returned to Finch Farm for treatment on the injury.

Feeney was captain of the Blues' U23 team before he joined Rovers for what was supposed to be the end of the season where he could gain valuable first-team experience as the club continue to groom him for the first-team.

According to a report by the Liverpool Echo, tests are expected to reveal a muscle tear severe enough to sideline him for the remainder of the campaign, dealing a blow not only to the player but also Tranmere who hoped the promising young centre-half could bolster their push for promotion.


Fran Mitchell
1 Posted 04/02/2020 at 16:23:36
Gutting for the lad.
Ajay Gopal
2 Posted 04/02/2020 at 16:50:29
Real bad luck for the young fella. Also to Tranmere and Everton. Hope he can bounce back from this injury. Just shows how fragile the careers of sports professionals can be.
Alan J Thompson
3 Posted 04/02/2020 at 17:02:56
I hope that Everton don't lumber Tranmere with a large percentage of his pay given the so short a time his loan has covered. And it goes without saying, may the lad recover fully and quickly from this injury.
Dave Abrahams
4 Posted 04/02/2020 at 17:16:01
The Liverpool Echo quoting that Tranmere hoped Morgan Feeney could bolster their push for promotion — that is pushing it a bit: they are third from bottom in their league and fighting a relegation battle!!!
Peter Neilson
5 Posted 04/02/2020 at 17:18:38
Good luck to him on a full recovery. Watched him the other week playing on the sand pitch against Chelsea U23s. He's a good leader and they are few and far between.
Mike Oates
6 Posted 04/02/2020 at 17:28:21
He's had bad luck before, about 2-3 years ago he was playing ever so well for the U23s, with Unsworth pushing him and he was getting regular first-team training opportunities. He then I think got the equivalent of tendinitis in his knee(s) which put him out of action for over 6 months. It was a real cruel blow which he's not got over, and the likes of Gibson overtook him as the potential next centre-half coming through.

His loan to Tranmere as well as Gibson's loan to Fleetwood would have highlighted which of the two could make it in the world of men's football, not the totally inadequate U23s set up.

Another long spell out is very damaging for the lad; he's a terrific leader, and an honest player who deserves better.

Meanwhile, across the park, one of Liverpool’s most experienced ball boys is showing the first symptoms of a cold and is a major doubt for their next game.

I'm sure he was hugely looking forward to testing himself at league football. I certainly was intrigued to see how both he and Lewis Gibson perform on loan.

This was his opportunity to showcase his claims to be retained, or attract the attention of interested clubs.

The four months league football he would have gained on loan at Tranmere is a critical loss to his development at this stage of his career.

Really gutted for the lad.

Hugh Jenkins
11 Posted 04/02/2020 at 21:07:58
Dave (4) - Tony 98) - just proves how out of touch the Echo is with anything that isn't RS orientated. They probably don't even send reporters to the Tranmere games any more - just pick up titbits from Twitter and rehash it. It's becoming the way and it is dangerous and it is "fake news".

Just had a suspected murder locally, the rumours on twitter are that the victims body has been found in the lock up of the chief suspect. On the evening news, police are saying that the body has still not been found, although the chief suspect has been arrested. As I said to my wife - circumstantially it looks like murder, but what if the supposed victim turns up next week hale and hearty?

Can you truly believe anything you read these days?

So watch this space: he might get a full match sooner rather than later. He was on the first-team bench the other week in a cup game.