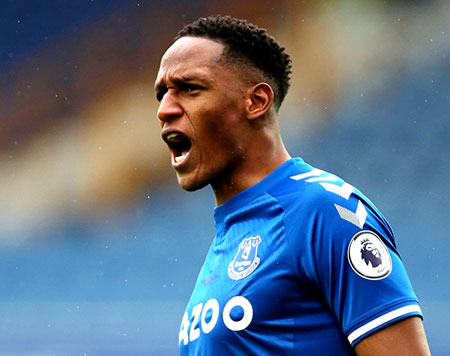 After years of unmitigated disappointment and depression in derby games, Everton finally win one, at Anfield, against the fading Champions, much to the credit and delight of manager Carlo Ancelotti.

Everton were without Yerry Mina for this Anfield derby after he was withdrawn from the game against Manchester City because of a calf injury; neither Dominic Calvert-Lewin nor Allan started the game but they were on the bench.

James Rodriguez started in his free central role... and in need of protection from the referee. Pickford returned to fitness and was of course selected — why wouldn't he be? Sigurdsson and Iwobi were on the bench also, after failing to impress against Fulham or Man City.

Davies kicked off and a hoof upfield won an immediate corner, that Godfrey should have done a lot better with when the ball came straight to him. But, after some persistent work by Doucouré, a brilliant ball forward by Rodriguez was superbly slotted in by Richarlison to give Everton a wonderful start... but you know only too well what usually happens when Everton score early.

A dirty elbow in the kidneys was the reward for James Rodriguez from the nasty Robertson, who knew exactly what he was doing, but of course no sanction from the referee... Richarlison was next to be clattered by Arnold and that did merit a free-kick that was not well used.

Doucouré then gave up the ball which led to a rapid attack that needed defending, which eventually led to an unfair Liverpool corner (Digne did not make any contact with the ball that was drifting out); it was put behind.

Doucouré was easily robbed again, but was rescued only to pass it straight to a Liverpool player! The result was more pressure but Everton finally advanced only for Kabak this time to clatter Rodriguez and at least get a talking to. Rodriguez went direct along the ground with the free-kick but it lacked power and guile to beat Alisson.

Liverpool were allowed to pass through all the way and Firmino's shot needed a deflection behind. From the corner, Henderson delivered a fantastic volley that Pickford just got enough on at full stretch to turn just beyond the post.

Liverpool came close again but it was Coleman defending this time before Arnold lashed one from distance that Pickford helped over his bar. Everton were finding it hard going to break out from the defensive headlock, Richarlison not doing a great job to hold up the ball as the lone forward.

Doucouré pressured Henderson to pull his hamstring and the Liverpool captain screamed in anguish as he hit the Anfield turf. He seemed to recover, however, and was allowed to resume... only to accept the fact a minute later that he could not carry on.

Doucouré once again gave the ball away and Holgate fouled Mane for a dangerous free-kick that Arnold skied well over the bar. Doucouré found a blue shirt and Digne swung in a fantastic cross that Coleman met well but could only direct straight at Alisson with acres of the goal either side... a terrible miss in truth, but he's not a centre-forward.

Liverpool advanced again but Jones was restricted to shooting wide from outside the area. Gomes was next to gift the ball to the home side and Gomes got a talking to after the ball went dead for his block on Tiago.

Phillips tried to ghost around the outside but could only head the free-kick into the side netting. But the red swarm kept flooding forward and Everton kept living on their wits and luck a little more than skill and strength and organization.

With 4 added minutes, Everton held on to their lead to go in ahead at the break.

Liverpool created their best chance with a cross that was headed close enough to Pickford. Richarlison was lazily strolling back from an attack such that he was offside when the ball came back to him. At the other end, Liverpool created a couple of guilt-edged chances that Everton incredibly defended and survived.

Liverpool came even closer, if that was possible, with Mane about to implement the coup de gras, when an amazing last-ditch intervention by Keane prevented the shot. But it was virtually all Liverpool as they raised the intensity while denying Everton any meaningful possession, as a clear deceptive dive by Salah went unpunished.

Sigurdsson, a player not known for his 'intensity', replaced the erratic Gomes just before the hour mark. A dirty tackle from behind by Tiago was not punished with a yellow card as Calvert-Lewin readied to enter the fray in place of James Rodriguez, with Shaqiri on for the Reds .

More defensive stress tests were to follow, Godfrey denying Shaqiri, and Arnold driving a low ball invitingly across goal and all the way to the far corner flag; Mane was booked for aggression on Holgate, who had marshalled him well.

Liverpool broke through yet again and Pickford was heroic in advancing to block. Calvert-Lewin did brilliantly to win the ball and carry it wide but inconceivably ran it behind for a goal-kick rather than threatening the Liverpool goal.

Liverpool resumed their probing attacks and Keane cleared again and again, only for the ball to keep coming back toward him as Arnold followed through very painfully on Digne's crown jewels.

More Liverpool pressure led to a corner that Keane cleared into touch. Godfrey cleared to no-one as the clock ticked on to 80 minutes. Keane cleared again, and this time Ricgharlison saw his chance, supported by the fast-running Calvert-Lewin, who shoots too close to Alisson, but tumbles over Arnold as he goes of the parried ball, and a penalty is called... rather harsh perhaps but all the better for it! And incredibly it was confirmed by Cavanagh after VAR asked him to look at the monitor. Sigurdsson slotted it with ice-man coolness to put Everton in the driving seat.

Richarliosn was replaced by Iwobi for the last few glorious minutes of an Everton win at Anfield. Mane dived to the ground when he felt Keane's had on his back, but no penalty. Keane was called upon to clear a few more times and Pickford tipped a stinging Wijnaldum shot over the bar.

Let the weeping and gnashing of teeth from those despicable redshite twats begin!