Laboured Everton drag themselves past Rotherham 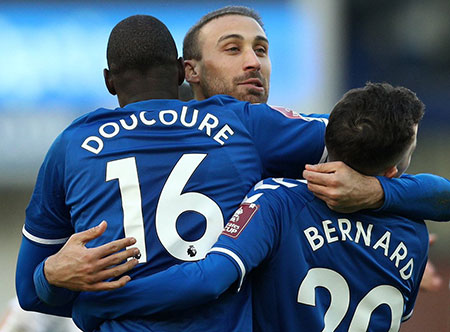 Everton are in the hat for the draw for the fourth round of the FA Cup but they made awfully hard work of beating Rotherham who took them all the way to extra-time with a spirited performance at Goodison Park.

Cenk Tosun set the Blues on their way to what looked in the early stages like it might be a routine victory over the team currently sitting 23rd in the championship and the Turk thought he had scored the winner late on after the impressive Matthew Olosunde had equalised Earlier in the second half but his goal was disallowed by a hairline var decision.

In the end, however, after an increasingly ragged and inept display from Carlo Ancelotti's men, it took a moment of class from James Rodriguez to thread the ball in for substitute Abdoulaye Doucoure to slot the winner in the second minute of extra-time to secure the Toffees' passage to the next round.

Ancelotti had gambled to a degree that the under-strength side he put out would do the business for him and it was a calculation that appeared to be vindicated by his team's positive start. With James sitting deep and looking to spray passes around and Anthony Gordon showing a pleasing willingness to turn and run at the opposite defence, there was an energy and purpose about Everton in the early going.

And it was Gordon who had the first sight of goal at the end of a mazy run into the heart of the Rotherham area but his shot was charged down before André Gomes fired wide a minute later. However, the teenager, who was starting on the left flank in place of the rested Richarlison, would play Tosun in in the ninth minute to give the striker the chance to get off the mark for 2020-21.

Tosun latched on to the beautifully-weighted ball and dinked it past the advancing goalkeeper to make it 1-0.

That early momentum dissipated, however, as soon as the visitors got a sniff that their hosts might not have been as up for the battle as they first seemed. The Millers didn't have their first meaningful attack until 20 minutes had gone when Michael Ihiekwe smashed a shot wide of Robin Olsen's goal but they would build on that platform against an increasingly ragged and inept Everton team.

With Gomes and Tom Davies losing a grip on midfield and USA international Matthew Olosunde becoming an ever greater threat against a rusty-looking Lucas Digne down the Blues' left flank, Rotherham quickly grew in confidence and after Michael Smith had lashed a decent chance wide, Olsen had to pull off a double save in the 22nd minute. First he denied Olosunde from the angle and then when Matt Crooks's tame attempt to convert the rebound was only cleared as far as Daniel Barlaser, Olsen had to push his shot over the goal.

Crooks then glanced a corner inches over the crossbar and Olsen had to be quick to intervene with a punch to take the ball off Ihiekwe's head as Rotherham threatened again on the half hour mark.

Everton briefly came to life again towards the end of the first period but at the end of a well-worked move that saw Seamus Coleman collect a “one-two” pass from Alex Iwobi, Tosun could only scuff the Irishman's cross wide of the far post.

If the latter half of the first half had been poor from the Blues, worse was to follow in the second. Olosunde sounded another warning immediately after the restart when he eased past Digne and went down in the box under the attentions of Gomes but referee Stuart Atwell saw nothing in the challenge.

Then, after Iwobi had dragged an effort across goal at one end, Rotherham levelled the tie at the other, capitalising on sloppiness in Everton's midfield and a wayward header from Davies that fell to Olosunde and he drilled the ball past Olsen in the 56th minute.

The required response from the Premier League side failed to materialise and Olosunde out-stripped Digne and centred where Wes Harding arrived from the other full-back position but his attempted curler was well wide.

With an hour gone, Ancelotti withdrew Gordon, whose early flourishes had faded as Everton's cohesion had evaporated, in favour of Bernard and Iwobi for Doucouré and then swapped Davies for Gylfi Sigurdsson and Digne for Yerry Mina five minutes later but the changes sparked very little life into the home side's performance.

They didn't win their first corner until Rodriguez's shot from 20-odd yards was deflected behind in the 73rd minute and would finish normal time having registered just a single legitimate shot on target. That's because Tosun's strike off a James free-kick from the left was adjudged by Video Assistant Referee Paul Tierney to have been offside.

Thankfully for Ancelotti, Everton began extra-time looking more like the superior side and Rodriguez would depart the action in the 94th minute having made a telling contribution a couple of minutes beforehand. Sliding ball into a huge hole between two defenders, the Colombian put Doucouré into the clear and the Frenchman made no mistake with a composed left-foot finish.

Bernard should have made the game safe a few minutes later when James's replacement, Niels Nkounkou, crossed from the left but the Brazilian's placed shot came back off the post. Tosun choked another shot wide a minute after that and Coleman forced a parried save from Blackman in the Rotherham goal with a strong drive from 18 yards.

The Championship team's fire had been extinguished by this point and they barely threatened Olsen's goal in the final 30 minutes, leaving Everton to see out the game and advance, but not without having perpetuated serious concerns about the players' collective mentality and the suitability of certain players to the Ancelotti project moving forward.

The draws for the Fourth and Fifth Rounds takes place on Monday evening after Stockport's clash with West Ham.