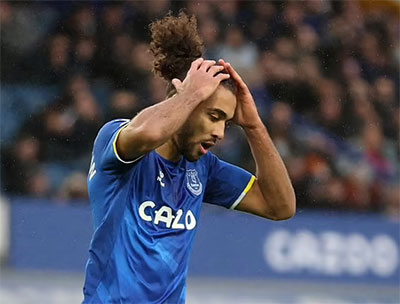 Everton's horrendous run of results extended into the New Year as Brighton held off a spirited but disjointed comeback attempt to win at Goodison Park for the first time in their history.

Alexis Mac Allister bookended a three-goal return for the Seagulls with an impressive 25-yard strike in the 71st minute that restored Graham Potter's side's two-goal lead and though Anthony Gordon gave the Blues hope with his second of the contest, Rafael Benitez was condemned to yet another miserable defeat.

As the Spaniard's reported feud with Lucas Digne continued, Benitez felt compelled to deploy Seamus Coleman in an unnatural left-back role and persisted with Jonjoe Kenny on the right side of a five-man back line.

Dominic Calvert-Lewin made his long-awaited return up front, flanked by Gordon and Demarai Gray but the England striker would not enjoy a triumphant return to the side. Instead, it was his penalty miss that ensured the Toffees would go into the half-time interval 2-0 down.

That was down to another suspect first-half display under Benitez that saw Everton a goal in arrears with less than three minutes on the clock. Coleman had drifted too far off Brighton's right flank which allowed the cross to come in from the right which Neal Maupay cushioned with his head into the path of Mac Allister who fired past Jordan Pickford.

18 minutes later, with Everton yet to register a shot on target, Yves Bissouma was ushered into the box on a driving run that ended with Allan deflecting his cross behind but the hosts well-documented inability to consistently defend set-pieces undermined them again.

The resulting corner was flicked on at the near post by Maupay and the unmarked Dan Burn had the simple task of heading home at the back post to double the visitors' lead.

Given Everton's form in recent months, it represented an almost impossible mountain to climb but they were gifted a way back into the match in the 23rd minute when Gordon went down in the box under Enock Mwepu's challenge and, following a check of the pitch-side monitor by referee John Brooks on the advice of VAR Stuart Attwell, the Blues were awarded a penalty.

Unfortunately, Calvert-Lewin, playing for the first time since scoring from the spot in the reverse fixture against Brighton at the end of August, spurned the opportunity, lifting his spot-kick over the crossbar searching out the top corner of Robert Sanchez's goal.

It was almost 3-0 when Coleman's poor clearance fell straight to Adam Lallana but Jordan Pickford did really well to dive to his right and smuggle the midfielder's shot around the post before Gordon worked Sanchez for the first time at the other end and Maupay smashed narrowly over in front of the Gwladys Street on the stroke of half-time.

Everton needed to respond quickly in the second period and they began in positive enough fashion when Gray crossed low and Calvert-Lewin had the ball taken off his toe at the near post and Burn did enough to prevent Abdoulaye Doucouré from scoring from the ensuing corner.

It was Gordon's persistence, however, that created the lifeline seven minutes after the interval. Cutting in from the right he eventually got a shot off from just outside the penalty area that took a heavy deflection off Lallana and bounced past Sanchez to register the youngster's first senior goal.

Gordon had another claim for a penalty waved away 10 minutes later when he collided with Marc Cucurella but the ball remained alive for Gray who forced a parrying save from the goalkeeper before Brighton hacked it clear.

Sanchez was called into action again in the 68th minute when he tipped Allan's crisp drive from distance over his bar but Everton's comeback was cut off at the knees three minutes later when the Seagulls scored again.

Mason Holgate had done very well to prevent Maupay bearing down on Pickford on the counter-attack with a last-ditch challenge but Michael Keane gave the ball straight back to an opposition jersey and when it the ball was pinged to Mac Allister outside the box, he drilled an unerring effort into the top corner.

Again, Everton were given hope five minutes later when Calvert-Lewin played Kenny in on the overlap with an excellent slide-rule pass and his low delivery was turned in by Gordon's first-time finish.

The Toffees' attempts to salvage a point were a little ragged, however, even though Benitez had finally opted to break his starting formation with the introduction of Salomon Rondon for Kenny after Everton's second goal.

The Venezuelan came close to registering an assist when he crossed for Gordon close to Sanchez's goal but the goalscorer couldn't guide the ball on target for his hat-trick before Rondon himself wasted the last opportunity by skying a volleyed effort over the bar in stoppage time.

The defeat, the ninth already under Benitez, extended the recent sequence under the increasingly unpopular Spaniard to just one win in 12 games and keeps Everton in 15th place, 12 points off the European places and just eight above the relegation zone.

Benitez once again blamed his players for the result, both for costly errors and what he sees as their failure to implement his methods for defending set-pieces. “We have shown character in a lot of games and played well in a lot of games but we are not capable of avoiding mistakes which are costing games," he complained afterwards.

“We had a slow start, conceded an early goal and after another mistake we conceded from a corner. It is not easy when you have these mistakes and then after we miss a penalty and it is even more difficult.

“What I can tell you is we were practising specifically these corners and how to defend and we made too many mistakes."