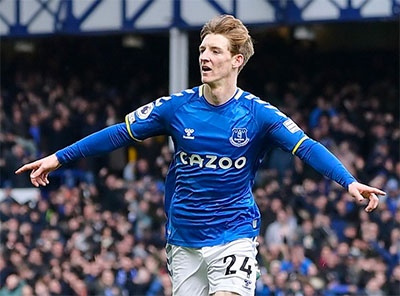 Everton ground out a priceless victory over Manchester United as Anthony Gordon's deflected first-half strike proved to be the difference in a vital game for the Blues in their quest to beat the drop.

The youngster's effort in the 27th minute was the first shot on goal by Frank Lampard's side following a nervy start but it was a lead that the Toffees defended manfully for the remaining hour, although it needed Jordan Pickford to be at his best in goal to secure the points.

Evertonians came into the game in despondent mood after Wednesday's defeat at Burnley but were buoyed by the return in midfield of Fabian Delph after four months on the sidelines and Allan following a three-match suspension as the out-of-sorts Abdoulaye Doucouré dropped back to the substitutes' bench.

The hosts looked markedly better with the changes in the middle but it was the visitors who carried the early threat as a poor clearing header by Delph ended with Marcus Rashford testing Pickford with a low shot that the England goalkeeper did well to push behind.

A poor ball out of defence by Michael Keane, himself back in the side after serving a one-match ban, allowed Bruno Fernandes to cross for Rashford who prompted an even better stop from Pickford.

Everton steadied themselves, however, and when Richarlison chased down a ball into the channel and his cut-back came off a United defender and fell to Gordon, the winger fired goal-wards and profited from a heavy deflection of Harry Maguire that diverted the ball past David de Gea.

Keane went close with a header that flew over off a Gordon free-kick following handball by Nemanja Matic and Richarlison forced a good save from De Gea when his shot took a deflection off a defender's boot and was spinning under the crossbar until the Spaniard palmed it over.

Vitalii Mykolenko, who typified the Blues' dogged rearguard action, had to head a dangerous Alex Telles cross over his own bar and then block another cross behind as United pressed in the closing stages of the first half but Everton were able to take their advantage into the break.

The second half was all about Everton defending their slender lead, frustrating their more talented opposition and trying to nick something on the break to give themselves a bigger cushion.

Fernandes almost found Rashford with an impressive deep ball into the Blues' box but the England striker just failed to get a crucial touch on it while, at the other end, a succession of Everton corners and balls across the face of goal by Mykolenko and Gordon failed to find Blue jerseys.

Ralf Rangnick's side needed a victory to keep their dwindling Champions League hopes alive and they maintained the pressure into the final 10 minutes, with Pickford getting down low to save from Paul Pogba, substitute Demarai Gray making a last-ditch block to deny Aaron Wan-Bissaka and Pickford then pulling off a vital reflex save with his arm to divert Cristiano Ronaldo's shot wide of goal in stoppage time.

For the time being, the result lifts Everton four points above Burnley ahead of their trip to Norwich City tomorrow but in terms of the psychology of the Toffees' bid to preserve their Premier League status, it was a massive result that they can hopefully build on when Leicester City come to Goodison Park in 11 days' time.