Branthwaite's loan to PSV may be cut short 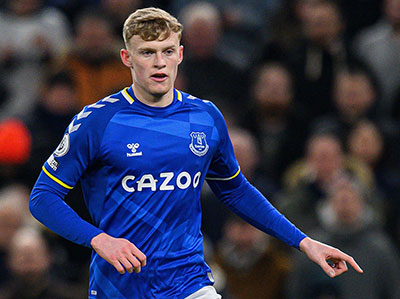 The fine concept of sending young players out on loan is to gain vital playing experience they would otherwise be denied if they stayed at Everton and patiently waited for first-team opportunities to open up for them.

Such was the logic of Everton's decision to send Jarrad Branthwaite out on a season-long loan to PSV Eindhoven, and a great opportunity for him to play in European competition, under the watchful eye of former Everton Director of Football, Marcel Brands.

But Branthwaite has only seen a limited number of games for the Dutch giants, playing only 3 of their 14 Eredivise games so far this season. He was subbed on in the second half for another 5 games and was sat on the bench for 4 of the remaining 6 games.

His participation in Champions League Qualifying and Europa League games has not been any better: 1 start and 2 late sub appearances, with 4 more games sat on the bench as an unused sub out of a total of 10 European games played by PSV.


However, the Daily Mail claims that this limited usage of the promising centre-back has prompted Everton to reconsider the loan move, with the possibility that he will be recalled by the club during the upcoming transfer window, and perhaps sent out on a new loan deal for the second half of the season.

While Branthwaite's chances of moving forward at Everton remain slim considering the long list of players who are ahead of him, The Mail includes a claim that Jose Mourinho would be interested in such a deal for Branthwaite to go on loan at AS Roma.


Neil Lawson
1 Posted 08/12/2022 at 12:47:48
There is the potential for both Keane and Mina to leave next month. Braithwaite is inexperienced but he is a real talent. I wonder if the plan is to extricate him from PSV so that he can warm the bench and be available to us. That can not be any worse than not playing in Holland ( or elsewhere). Subject to injury, Coady and Tarkowski are not going to be ousted. Godfrey and Holgate are available but Braithwaite offers the alternative of the big imposing centre back ( a la Mina ) who may be preferable on certain occasions. Any money generated/saved is money towards the striker desperately needed on Jan 1st. It will be disgraceful if that striker is not already identified and ready to sign at the earliest date. Perhaps a second to follow. If DCL can then get fit the competition for places should hopefully enhance performance. However, this is Everton !!
Mike Gaynes
2 Posted 08/12/2022 at 21:49:06
I'm torn here. On the one hand I'd love to have Jarrad back as a backup for Tark and Coady, assuming that two of the three surplus CBs (Mina, Keane and Holgate) are sold in January.

On the other hand Godfrey will also likely be ahead of the kid in the rotation, and he might not get very much playing time here either.

Playing for Jose at Roma would be a phenomenal experience, and that might be the best solution of all. They play with three centerbacks, with Smalling in the middle, Mancini on the right (Roberto's son) and a Brazilian named Ibanez on the left.

One thing for sure, Branthwaite needs games. Lots of games.

Dale Self
4 Posted 08/12/2022 at 23:57:28
Not getting weird about it but what happened to Steve Shave's and my contributions to this thread. They were both on point and contained no controversial material.
Dale Self
5 Posted 09/12/2022 at 00:19:28
okay, just saw the disclaimer about the new host, never mind about that. I'd like to see him return and while Godfrey would get first look he wouldn't be good for the full 90 so maybe there is some space for the kid. I just liked his energy and his willingness to get forward with the ball against Chelsea. One forward dribble in that game pushed the whole team forward and that was enough to convince me that he could contribute significantly.
Danny O’Neill
6 Posted 09/12/2022 at 05:15:11
A shame this one didn't work out as it should have been a really good experience and development opportunity.

It's a tricky one. We'll be bringing a young player back who hasn't had much game time and down the pecking order so likely won't get much game time.

I'm not convinced that Keane will leave in January. Maybe Holgate. As for Mina, we'd have to do an "Andy Gray" and hide his medical records from any would be suitors. But his history, he'd probably snap a toenail in the medical and be out for 6 weeks.

But it seems obvious that if we're recalling a centre back from loan, at least one of them will be going.

I'd say one of them might want Branthwaite for the rest of the season.

Dupont Koo
8 Posted 09/12/2022 at 08:45:04
Didn't have a chance to watch Jarrad's highlights under PSV colours so far. While he has a Premier League Body and is comfortable bringing the ball upfield, his positioning needs a lot of refining (the image of Ivan Toney taking advantage of him that led to the red card back in May still lingers) and he does not have a lot of pace to burn.

Playing in a league like Eredivise ironically, his strength do not stand out as much and his shortcomings were magnified. Which might be, as I speculate, the reason why Ruud Van Nistelrooy has not been playing him much.

Also, all the Directors of Football like to bring in their "own" Head Coach and Van Nistelrooy was someone "inherited" by Brands (RVN was brought back to PSV as the Reserve Team Manager a year before Brands made his own return to the club): it would not be a surprise that Jarrad might be a scapegoat between potential tension between Brands & Van Nistelrooy.

Ruud has been picked him in some big games against league and Europa contenders. Myself, I don't see where he's been treated poorly.

Don't think it was realistic that an untried 20-year old, who PSV isn't going to keep, would be pushed into the line-up over that club's regulars just to help Everton.

The flip side to his lack of playing time is that Jarrad is in a good atmosphere at a well-run club with legit title ambitions.

Besides, the Club didn't sign Coady and Tarkowski to sit while Jarrad plays. And hate it or not, Keane, Holgate, and Godfrey are veteran EPL players signed thru 2025.

So, IF Jarrad is recalled I suggest again the Club look at the Championship for his next landing place.

Personally I have a feeling from what I’ve seen that he ain’t the answer to any questions we have.

Anyway, the games and seasons will go by and we'll see how good he is or is not. Just like the rest.

Besides, the report today is that he's staying with PSV for the rest of the season.

At this stage of his career, the most important thing is that he is playing competitive football. Behind closed doors on the training pitches of Finch Farm is no good for his development now.

I don't think calling him back would be a good move for the player, as he's still going to be on the bench barring injuries. Unless the club are moving on a couple of the centre-backs in January. But still, he's back-up, so no change from his situation at PSV.

The Roma link is interesting. Under Mourinho, someone who, although always put emphasis on midfield dominance, was and is defensive minded. And the Italian league in my experience (which isn't totally knowledgable), is very tactical, cautious and defensive. That could be a really good learning experience for Nathan.

I suppose it depends what happens with Mina, Keane or Holgate next month.

I'm puzzled by the negative comments, the last time I saw him was starting the Europa League game against Arsenal and, for a 20-year-old with limited European experience, I thought he was very good.

He's still got a lot of developing to do and experience to obtain, but 20-year-old centre-backs are rarely good enough to start in the Premier League and most don't reach their peak for a few more years yet.

Besides, the club doesn't seem in any rush to push him into the first team. Injury or contract, Mina's gone end of season. Still, Coady, Tarkowsi, Keane, Holgate, and Godfrey are all in front of him.

To me, Jarrad is definitely one for the future, a good future. With the club doing so poorly these last couple years and at least some disarray in the front office, I think there's a bit of "straw-grasping" around him as we search for something positive to focus on.

Obviously every player is different and development happens at different times, but generally, you won't see the best out of a centre back until they hit about 28. And they can peak and continue at 30 and beyond.

Keepers even further up the age scale.

It's why I feel we are often harsh on young keepers and centre backs.