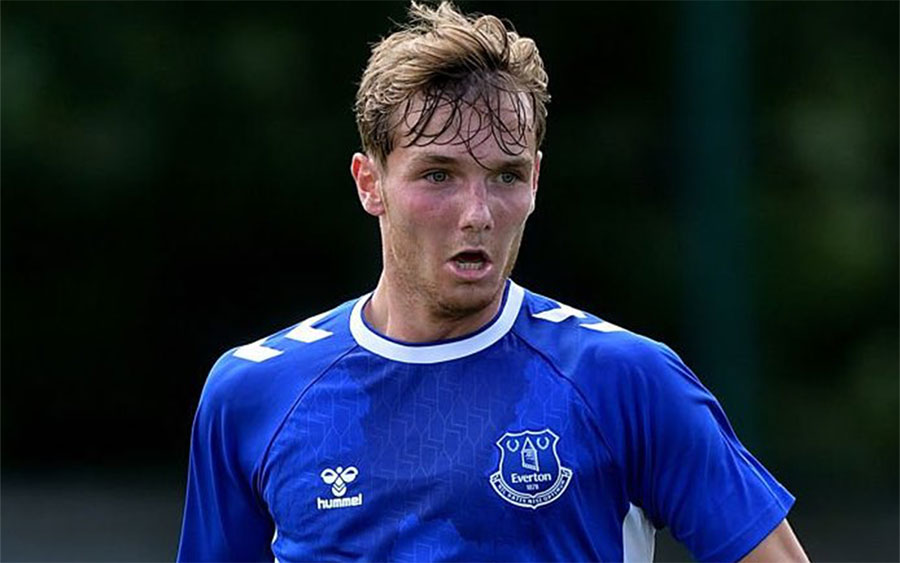 Lewis Warrington has been at the Everton Academy since the age of 6 and is a lifelong Evertonian.

Born into a family of die-hard Evertonians on the Wirral, Warrington originally lived in Seacombe before moving to Liscard, where the seeds of his football journey were planted. At four years old, his dad got him into the game by taking him to every soccer school across the borough as often as possible.

“I started with my brother. We used to go to the Soccerdome in Seacombe most days. We did little football schools,” said Warrington.

A gifted all-round midfielder, he boasts impressive energy, and expansive passing range and eye for goal. And he was rewarded with his first professional contract at the club, announced the day after he turned 17, with the player crediting the exceptional coaching he had received throughout his time in the Academy:

“I’ve put in a lot of hard work and sacrifices, so to make this next step and sign a pro deal means everything.

“I’ve been at Everton for 11 years and the support has been immense from the start. The coaching I’ve had here has been incredible. Every coach I have had has added something to my game.

“They’ve helped make me the player I am, and I’ve got to keep going.”

He started to establish himself in the Under-18s team during the 2019-20 season, which was curtailed by the Covid-19 pandemic.

Warrington continued his impressive progress in 2020-21, cementing his position as a mainstay in Paul Tait's Under-18s side. He was an influential presence in the Blues' thrilling FA Youth Cup victories over tournament favourites Manchester City and Chelsea – and captained the team on several occasions during the season.

Warrington moved up to the Everton's Under-23 side towards the end of 2020-21, playing four of their final five Premier League 2 games of the season.   He received the Sir Philip Carter Award – presented to a player “who has shown first-class commitment and achievement in his education while at the Academy” – at the season-ending Academy Awards to cap a fine personal campaign.

For the 2021-22 season, Warrington did well to consolidate his position in the Under-23s with consistent performances. The 19-year-old had particularly shown a lot of promise sitting at the base of a midfield three and the decision was made at the end of January 2022 for him to join Tranmere Rovers on loan for the rest of the season.

The central midfielder settled well and, despite some disappointing results for Rovers, he quickly established himself in the starting XI and become a fan favourite, scoring his first senor goal in a win over Harrogate Town.

Lewis would go on to make 17 starts for the Merseyside club, playing 14 full games and helping Micky Mellon's side to finish 9th in League Two. At the end of the season,  Everton extended his contract for another 2 years, with the prospect that he might graduate to the first-team squad.

That potential step up was given extra impetus when Lewis went on the Summer US Tour in 2022 and performed well in the first game against Arsenal in Baltimore. With Frank Lampard rating him very highly, the young Merseysider was given his senior debut as a second-half substitute in a League Cup tie at Fleetwood in August.

"I'm absolutely buzzing because I've been a Blue my whole life and if I wasn't playing, I'd have been in the away end tonight – so it's a surreal moment for me and my family.

"It's been a long journey but an enjoyable one. I couldn't have done it at a better club and, obviously, I support the club so it's made it that much more special"

Though Warrington had forced his way to the fringes of the first-team set-up and impressed Lampard, it was felt the best thing for him in the wake of the summer acquisitions of Idrissa Gueye and James Garner was to go back out on loan.

He joined Fleetwood Town for the 2022-23 season on transfer deadline day.

Interview in The Echo