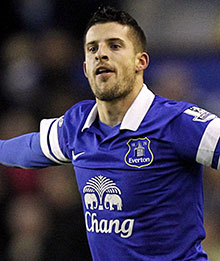 Kevin Mirallas' recovery from a torn hamstring has progressed to the point where he has rejoined first-team training, Roberto Martinez has revealed.

Speaking at the "An Audience with Roberto Martinez" event at the Titanic Hotel this evening, the manager revealed that the Belgian has stepped up his rehabilitation and joined the squad for the first time since pulling up with the injury in the first half of the Merseyside derby in September.

Martinez suggested last week that the current international break would be an important spell for Mirallas as he builds towards a possible return around the end of the month.

You don't realise how much you miss Mirallas until he's out injured a while, we have missed his direct way of playing and his goals.

Hoping his recovery just goes well now and he is back soon.

We have the wingers back just in time to clear space on the treatment table for our central midfield...

Max Wilson
7 Posted 14/11/2014 at 09:22:33
This will be a welcome change. But alone he can't solve our problems. We need faster and better penetration in the final third to our hit men, Eto'o and Lukaku, playing together naturally.
David Hallwood
8 Posted 14/11/2014 at 09:43:16
Great news. But lets hope he isnt rushed back too soon; but agree hes our MVP a the Americans would say.
Michael Polley
9 Posted 14/11/2014 at 10:33:48
Good news. But let's not rush him back. We need to be careful with hamstring injuries. Don't want any setbacks.
Oscar Huglin
10 Posted 14/11/2014 at 11:13:17
Put Mirallas in for McGeady and Stones in for Distin and our starting line-up against Sunderland becomes our strongest possible side. Maybe it can actually perform when there hasn't been a European game 3 days earlier...?

Definitely a side with the quality to push for a top four place  if it performs. And with options on the bench like Osman, Distin, Naismith, Gibson, McGeady and, at a stretch, Atsu and Besic, this could be a really exciting 'Christmas revitalisation' (a la OFM) if everyone stays fit. 2015 could see a strong push for the top 4.

Didn't we have a similar problem with Mirallas's hamstring when he first signed two years ago?

Think he was ruled out for two months before Christmas and then we kind of rushed him back and I recall him limping off during a freezing cold FA Cup tie at Bolton not to be seen again for another six weeks or so.

He's a a massive player and it's fair to say none of the other wide players have stepped up greatly in his absence, well maybe McGeady a tad but not much.

Jim, I was thinking that Oviedo could be back quite soon, considering he's had his screws removed, surely he's nearing fitness?

Great to hear KM is nearing a return. He's the one. Not even necessarily our best player but you just have to have someone who is prepared to break the lines and add a bit of unpredictability to the play. Even on his bad days he changes how teams setup against us.

Tom Bowers
19 Posted 14/11/2014 at 23:15:05
Good news about Kev but not so good about McCarthy and Baines. However maybe a change at left back is not such a bad thing. Baines has been great but is defending has waned a little this season and Everton will soon have options if not already.

McCarthy is solid and will be missed if he cannot make the Hammers game but they should be able to take the points with what they have, which is a lot more than West Ham have, even if they have been an improvement this season.

Everton should score goals as they did against Arsenal, Chelsea and Palace, (three other London teams) but they failed to get the three points so hopefully with Kev available things will be different.

Steve Jenkins
20 Posted 15/11/2014 at 09:51:54
He’s been a big miss, a winger/attacking mid with a real end product to his game.
Karl Masters
21 Posted 16/11/2014 at 11:17:34
Barry ankle injured, McCarthy and Baines nursing dodgy hamstrings, Coleman still only playing some of the games due to a dodgy hamstring, Mirallas edging back after a torn hamstring, Stones out for months, Alcaraz out for months, Oviedo still not fully fit, Kone lost down a plug hole somewhere, Lukaku with his mystery toe injury.

Perhaps that's why there is no rush to get Kone back in the fray!

No point in rushing Kone back until he is absolutely 100%.