Mirallas still not over ankle injury 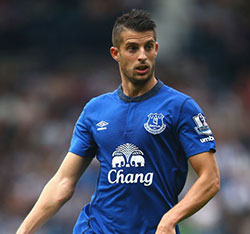 Kevin Mirallas admits that he is still feeling pain in the ankle that was initially damaged at the end of last month's win over Queens Park Rangers.

The forward's comments to Belgian media provide some context to his reduced playing time in recent weeks which has seen him complete the full 90-minutes just once since.

The 27 year-old started the cup tie against West Ham last week but was withdrawn after 65 minutes and only played 15 minutes of Saturday's draw with Manchester City.

Mirallas was chopped down by a poor challenge from QPR's Jordan Mutch a month ago and had to be stretchered off the field. He missed the following game at Southampton but returned against Stoke City the week after, only to pick up a knock to the same ankle.

He was able to finish the game but was dropped back to the bench for the game at Newcastle two days later and was withdrawn after an hour at Hull. "I'm still not 100% fit," he told Telenet Sport.

Why can't we have a calm, professional, quietly sensible manager like Koeman?

Atsu has been a bad move.

Will Firstbrook
10 Posted 12/01/2015 at 20:32:42
Agreed we have little by way of wide options and therefore the temptation to bring him back into the squad a bit prematurely. However, considering Kev's style of play and his own history of nagging long-term injuries, seems folly to risk it until he is 100%.

Lord how I wish our skilled players were built like the seemingly indestructible Barry.

Get a grip gents.

Tony Doran
15 Posted 14/01/2015 at 09:16:26
Looked very sore on that free kick and dribble against the hammers. You sometimes wonder if he's inviting the manager to leave him out.