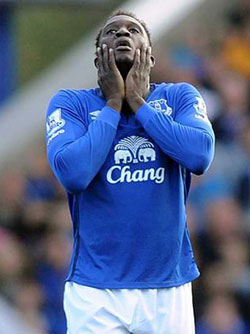 Romelu Lukaku had the Blues' best chances but was twice foiled by David Ospina
Everton struggled to turn their dominance in possession into meaningful chances and eventually succumbed to a 2-0 defeat at the Emirates Stadium thanks to Olivier Giroud's first-half strike and a deflected late effort from Tomas Rosicky.

Roberto Martinez made three changes to the team that started against Young Boys in the Europa League on Thursday, with Muhamed Besic returning to a now-familiar trio of central midfielders in place of Darron Gibson, John Stones coming back into the defence following suspension in place of Antolin Alcaraz and Ross Barkley replacing Steven Naismith behind Romelu Lukaku.

And the Blues made a confident start to the game against a team reeling from their 3-1 defeat to Monaco in the Champions League in midweek, controlling possession for much of the first half and going close to opening the scoring when Lukaku nipped the ball off Gabriel Paulista but was then foiled by good work by Arsenal goalkeeper David Ospina.

Giroud headed inches wide from Alexis Sanchez's cross as the Gunners finally started to test the Everton back line before Lukaku raced away on the counter-attack but delayed his shot long enough to allow Gabriel to execute a well-timed, last-ditch tackle.

The home side took the lead six minutes before the break, however, from a corner from their right side. Giroud stole in front of Stones and side-footed into the far corner to make it 1-0 heading into half time.

A flurry of set-pieces gave Everton the opportunity to put some pressure on the Gunners' back line early in the second period and Gareth Barry went close with an acrobatic effort before Kevin Mirallas lashed a while shot wide and the impressive Phil Jagielka blocked a close-range Giroud effort behind.

The Blues' only real chances to level the match in the second half were both foiled by Ospina; he palmed the first from Lukaku over the bar from Barkley's cross and was able to comfortably gather the second from substitute Aaron Lennon as he slid in to meet Seamus Coleman's cutback.

Everton's challenge faded in the final quarter of an hour, however, and Rosicky came off the bench to kill the game in the 89th minute of regulation time with a low drive that kicked up off Jagielka's foot and over Howard.

The Czech midfielder saw another late shot beaten way by the American and Giroud missed with a free header as the Gunners tried to extend their lead in injury time but it finished 2-0.

The result leaves Everton mired in 14th place, six points above the relegation zone having won just twice in the last 15 League games. It increases the pressure on Martinez as he takes his charges into a tricky away game at Stoke in midweek before the European campaign continues against Dynamo Kyiv.