“Our Tam” McInnes, an Everton First

The story behind the very first Merseyside derby that took place in 1894, two years after the schism that saw Everton leave Anfield for Goodison Park, and Tam McInnes who scored the first goal between the two clubs.

When the Football Clubs of Everton and Liverpool run out to meet each other in the forthcoming Merseyside derby game, it will be for the 194th time in the League. No other city in England can claim to have staged more local derby games at the top level of English football than Liverpool.

The game will take place on the former home of the Everton Club at Anfield before a capacity and fiercely partisan, crowd and the atmosphere will be electric.  Yet, when these two deadly rivals first locked horns with each other it was not at one of their present day homes but on a cricket ground before a crowd of 10,000 people at Hawthorne Road in Bootle. The date was April 1893 and the occasion was the final of Liverpool Senior Cup.

There was much local speculation as the match approached whether the team from Goodison Park would include any of its Football League players, because the season was now at an end, or whether they would leave the game in the care of the second string of players from their Combination eleven which had brought them to this stage of the competition. They chose to field eight of this side and reinforced it with three first-team players.

The Liverpool Club, who were in their first season of existence, had recently pipped the Blackpool Club on goal difference to become champions of the Lancashire League with a team of players that had mostly been imported from Scotland. They had struggled at first to find some cohesion but were now beginning to blend into a competent side. They fielded, in a concerted effort to win the trophy, their best available eleven.


Herbie Arthur, the former Blackburn Rovers and England goalkeeper, took charge in the middle as the play commenced. The game, as anticipated, was a fiercely competitive affair and it ended in controversy. Tom Wylie, a former Everton player, gave Liverpool a first-half lead that they were holding when, in the last minute of the game, their opponents took a corner kick which landed in their goal mouth. Mayhem then ensued as the Everton players, appealing for penalty kick, claimed the ball had been fisted clear by one of their opponents.

Mr. Arthur then consulted his linesman, Arthur Bertram Hull, who ruled in favour of Liverpool and, after being thrown in the air, the ball was kicked clear. Moments later the final whistle was sounded. The Everton executive then lodged a protest against the general incompetence of the old England goalkeeper so the trophy was upheld until, after a meeting of Liverpool & District FA, it was awarded to a Liverpool Club who now made an outrageous, and eventually successful, bid to join the Football League.

The member clubs met on the 26th of May, 1893, at Chancery Lane in London to decide the various issues that were open to debate. The first item on the agenda, after a series of test matches, confirmed the clubs who would compete in Division One the next season. Newton Heath, who had won their test match, were re-elected while Accrington and Nott’s County, were relegated after being beaten by Darwen and Sheffield United respectively. The committee men then moved on to discuss the issues which concerned Division Two.

They eventually decided that the number of clubs in the Division should be increased from 12 to 14 but, on a proposal put forward by Grimsby Town, it was decided to increase the number to 16. Applications to fill these vacancies were received from Liverpool, Newcastle United and Rotherham Town. The Liverpool executive, if this newspaper article is to be believed, had the chutzpah to attempt a leapfrog over the Division Two clubs and be elected directly into the First Division of English Football.

The committee Chairman, however, pointed out to them that this was against the rules, so Newcastle United and Rotherham Town were duly elected. Liverpool now had five days before the next meeting to re-apply for one of the two vacancies that still existed. They did so and, along with Woolwich Arsenal, were elected to Division Two of the Football League. The Accrington Club, who were experiencing financial difficulties, decided not to re-apply for membership so their place was awarded to Middlesborough Ironopolis. 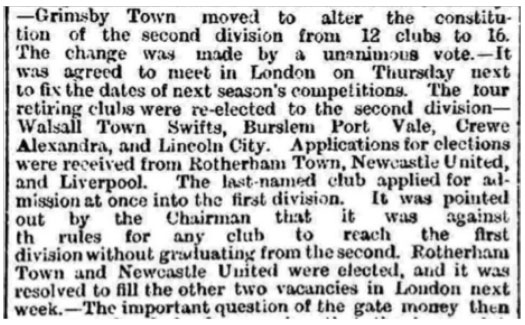 The Football League committee then drew up a list of fixtures which were issued to the public on the 5th of June. Liverpool, it had been decided, would met neighbours Bootle, at Hawthorne Road on the 10th of February while the return match would be played at Anfield on the 23rd of March. The matches, however, never took place because in the middle of August the Hawthorne Road executive announced that they could no longer survive in the financial climate of the day and thus became the first football club to resign from the Football League.

Their untimely resignation left it too late for the FA to bring in a replacement club so, for the only time in its history, the Football League Division Two season was played out between an uneven number of clubs. Liverpool, who were undefeated, won the title with ease and, on being elected to Division One, laid the foundations for the first Football League game that was to be played between Everton and Liverpool. The Goodison Park club, in the meantime, had signed a player from Scotland who would write his name firmly in to the folklore of Merseyside football. His name was Thomas McInnes. 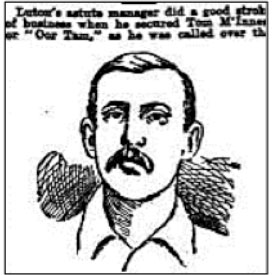 He had been born on the 22nd of March, 1869 in Glasgow where he began his senior football career with the Cowlairs club. It was while playing for this now defunct club that he won his one and only international cap when he represented Scotland on 9th March, 1889 in a 7-0 win over Ireland where he scored one of the goals. That summer, at the invitation of the Nott’s County club, he moved South and began playing his football on the Plains of Albion. “Tam” soon became a great favourite with the crowd at Trent Bridge and represented the Nottingham club in the 1891 FA Cup final against Blackburn Rovers where they were beaten by 3 goals to 1. He remained with the “Lacemen” for three seasons before returning to his native Glasgow where he continued his football career with Third Lanark.

On the 19th of April, 1894 the Cathkin Park club, which included McInnes, appeared at Goodison Park in a fixture that was arranged for the benefit of former Everton player Daniel Kirkwood who, while playing for Liverpool Caledonians, had ended his career through injury. It is fairly safe to assume that during this time McInnes was persuaded by the Everton executive to return to Liverpool the following season and resume playing professional football in England. The Scot scored on his debut against Sheffield Wednesday and had added three more goals when Everton, who had won their opening seven games, faced Liverpool for the first time at Goodison Park.

The occasion produced sights never before seen in the Mersey Seaport as thousands of people descended on the Everton ground from all directions. The attendance was given as 44,000 while £1,026 was taken at the gate. Nothing approaching these figures had ever been known in the history of the Football League. The play had been in progress for just ten minutes when Bill “Soldier” Stewart sent over a cross that was headed home by Tam McInnes to give Everton a first half lead. Two further second-half goals, scored by Alec Latta and Jack Bell, then gave the home side a comfortable 3-0 victory.

Tam McInnes went on to play 47 Football League and FA Cup games for Everton, scoring 18 goals in the process, before signing during the spring of 1895 for a Luton Town side who had just become members of the Football League. He settled, with his wife and two children in the Bedfordshire town and later played for both Bristol Rovers and Bedford Queen Engineers before retiring from the game in 1901 to work in an Iron Foundry. Thomas McInnes, the first man to score in a Merseyside Derby game, died at Luton in 1939.


Bob McEvoy
1 Posted 23/02/2016 at 09:49:38
Tony, as always, a joy, especially this particular article which neatly reinforces Evertonian prejudices about the evil conniving dark side.

And for those who like to 'know your history' and have wondered after a Clive Thomas disallowed (for fuck all) goal, or witnessing Clattenberg ignore Carra strangling an Everton player, 'How long have these fucking derby decisions been going against us?" you now have an answer.

We're very keen to get your thoughts on Everton, the array of fan media offerings, and ToffeeWeb specifically. You could win Â£100 for your trouble. Complete the survey now!