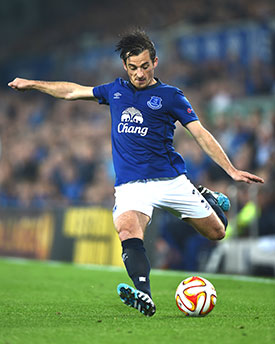 Leighton Baines missed the end of last season after undergoing ankle surgery (Shaun Botterill/Getty Images)
Everton have been rocked by the news that Leighton Baines faces another spell on the sidelines with an ankle problem.

The 30-year-old defender suffered a relapse of the injury that required corrective surgery towards the end of last season, handing Roberto Martinez a major injury setback on the eve of a new season for the second year running.

A year ago, Ross Barkley was ruled out of the first eight weeks of the 2014-15 season with medial knee ligament damage sustained in training two days before the season opener at Leicester.

Now, the Catalan will be forced to do without one of his most important players as Baines requires more time to recover after re-injuring the ankle that has dogged him on and off for the last two or three years.

"With Leighton, it was a very, very unfortunate block in training, where the ball hit his ankle that he had a little bit of trouble with in the later stages of last season," Martinez told evertonfc.com, although he has not provided a timeline for Baines's return.

"We're just hoping we can get him back quicker than we fear because the injury looks very similar to what he had before.”

Martinez has Bryan Oviedo as a ready-made replacement for his first-choice left back but he will be mindful of the Costa Rican’s own injury problems over the past two seasons. Oviedo suffered a horrific leg break 18 months ago and then saw his attempted comeback aborted by a hamstring injury in March and a metatarsal fracture in April.

Both he and Baines returned to pre-season action earlier than anticipated this summer, featuring in the Blues’ pre-season games in Scotland, boosting the manager’s options at left back following the decision to let Luke Garbutt spend the season on loan at Fulham. Ironically, Garbutt will also miss the first 6 weeks of the campaign with an ankle issue of his own.

Everton have Brendan Galloway as further back-up to Oviedo but with Tony Hibbert facing an undetermined amount of time on the treatment table himself, the loss of Baines amplifies concerns over depth in both fullback positions at Goodison Park.

Bit of good news with two players signing new contracts then this, at least we've got young Brendan to cover, but we desperately need cover at the back.

The current 'style' we've been playing doesn't rely on the FBs bombing forward as much as they used to so hopefully Oviedo will be fine. A run of games will get him to the level he was at before his leg brake, fingers crossed.

Putting things into perspective - we're playing Watford at home tomorrow. Baines or no Baines, if we can't get past them then we're fooked anyway.

How's that for a POSITIVE statement!

That leaves either a hardly match fit Oviedo or a rookie kid in Galloway, might get away with it against poor opposition tomorrow but after that our defence will get torn a new one.

It really is depressing being an Evertonian these day's.

So as much as I'd be disappointed if Baines is out I'd be comfortable with Oviedo coming in and doing more than a decdnt job!

What is the source of the rumour?

Maybe you guys are happy that we are the lowest spenders, have no preparation in place to compensate for injuries and are quite frankly doing nothing so far to rectify last season's slump.

Call me negative but after witnessing so much shite over the year's I'd say I'm being a realist lads.

Let's see where we get to by the end of the window. Martinez' first window was the best I can recall in modern Everton history but the real juice did n't flow till the last day. I don't see my position as either especially positive or negative, but I'm arguing that it would qualify as realistic.

You have an opinion, fine, but we all know what it is so you don't need to tell us over and over again. If you think there's something important to say then write something properly, a fan article or something. It's the people who pop up on every thread just to whinge about the same things in the same ways all the time that make ToffeeWeb hard to enjoy.

Perhaps we need another season with Walter Smith to adjust expectations. Idan Tal was our most skillful player.

They say you should never meet your idols, but I've met a few T'Webbers in person and it's never been disappointing - at some point it dawns on you that we do have 1 thing in common!

How can you fuck up a serious ankle operation.

Galloway did quite well but going forward I don't think he's really going to offer what a proper fullback would do.
Oviedo doesn't look anywhere near fit to be honest, very game when he came on but looked sluggish.

We really need to go hell for leather in the remaining weeks of the transfer window.

Des Farren
54 Posted 08/08/2015 at 19:22:43
Jay @45. I can only assume like most Premier League clubs,we are using the best available.
The fact that Baines is injured again does not point to an operation that has been" fucked up".
There are other possibilities,yes?
Des Farren
55 Posted 08/08/2015 at 19:31:31
There are quite a few on here would qualify for a "moan a minute" award.
To be fair,Jim would be up there with the best,but he is certainly not the worst.
Peter Morris
56 Posted 08/08/2015 at 20:15:49
I have a theory as to what is behind our ongoing injury jinx, which undermined last season and is threatening to do even worse this. I think that Finch Farm was built on an ancient Viking burial ground, and the disturbed spirits are taking our their revenge on our playing staff. I think Buffalo Bill needs to get an exorcist in, and put on a London stage production about the whole mystery-it will be a sell out.
Anyone got anything better to offer?
Phil Walling
57 Posted 09/08/2015 at 01:21:56
Still in Cyprus lads, but missing the Warriors more than Everton at present. Watched today's game in local sports bar but nothing to post only 'Told you so.........
Ernie Baywood
58 Posted 09/08/2015 at 03:03:44
Good for you Phil. Order a Zivania and celebrate; you've earned it.
Colin Glassar
59 Posted 09/08/2015 at 12:52:44
So the ball caused the damage to Bainsey's ankle? Well, I'd either sue the surgeon or the ball. Ridiculous but it must've been a freak accident.
Clive Rogers
60 Posted 09/08/2015 at 14:26:26
Really this shows how badly run we are. Baines never looked right all last season, had his operation late on and is 31. It was entirely predictable that problems may have occurred in his recuperation. It is a similar story with Oviedo who has not been the same since his broken leg and was poor in pre season and yesterday. So we let Garbutt go on loan, and have to play an inexperienced CB at LB. The same will happen if Coleman gets injured, as there is no way Hibbert will be able to stand in. I despair.
Brian Cleveland
61 Posted 09/08/2015 at 15:29:28
Colin, I had the same reaction... hit by the ball? Yeah that's unfortunate... that would never happen during a game... would it?

To be damaged when hit by the ball it would have to be made of plasticine!

...who's also injured, to a lesser degree.