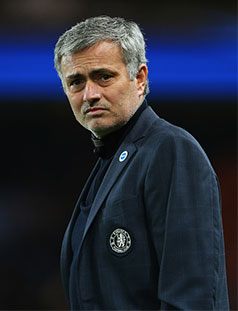 Jose Mourinho's frustration at having to wait for Roberto Martinez to complete his post-match interview before he could beat a hasty exit back to London was caught on tape after Everton's handsome 3-1 win over Chelsea on Saturday.

The Portuguese interrupted his opposite number while he was taking questions from the Liverpool Echo's Greg O'Keeffe where he told Martinez that he should have allowed the visiting manager to get his press duties done first because he "had to travel".

The Catalan responded by saying it was neither his nor Everton's decision before joking with the reporter that he preferred the Mourinho of a year ago after Chelsea had beaten the Blues 6-3.

Far from the "furious bust-up" between the two managers that many media outlets have tried to sensationalise it as, the exchange was brief and Mourinho is heard saying "fucking hell" before apparently stomping off.

The incident typified Mourinho's mood after the game – it wasn't much better before-hand either; he walked out of an interview with BT Sport when the topic turned to John Stones – in which he bemoaned Chelsea's luck and tried to argue that his team were unfortunate to lose the contest, that despite them having just two efforts on target in the entire game.

The loss, the Champions' third in fives games and their second in three seasons at Goodison Park, put another dent in their hopes of retaining the Premier League title and increased the pressure on their manager.

Everton, meanwhile, took their tally for the season to eight points with a morale-boosting victory on the back of Steven Naismith's "perfect" hat-trick.

» Listen to the audio

Perhaps someone reminded him that it was only a few years ago that Ancelotti had been sacked in the Goodison corridors after yet another humiliating defeat at the hands of such a little club!

I've watched the match 3 times now and the camera was one Moanreamio more than anything else.

Well done Bobby, hope this is the start of something special. You won some fans back so don't screw up in your next match.

James Marshall
9 Posted 14/09/2015 at 07:57:10
Maureen is losing it big time! Hahaha! His rambling interviews and inability to even look anyone in the eye is hilarious.
Eugene Ruane
10 Posted 14/09/2015 at 08:16:38
Well this is a little confusing. My reading of RM's 'When they beat us 6-3, he was such a nice man, I prefer him like that' was not I prefer him nice like last year, but I prefer him behaving like a twat – the way he did just then (like that there). In other words, preferable if he's narked as fuck and nasty coz..we've won. Come on Roberto, sort this out!
Tony Burke
12 Posted 14/09/2015 at 08:25:27
It was abundantly clear what Roberto meant. Mourinho can be pleasant and generous in his opinions but only when it suits him and only when his team have won. He's not alone. Wenger is another example of the insufferable individuals who prosper in the Premier League.
Matthew Salem
13 Posted 14/09/2015 at 08:27:53
This is very amusing. In all fairness, Roberto loves to talk and talk and when he is asked a question and I can imagine Maureen just seething and seething as Roberto goes on and on about "character, fine margins and complete performances". Love it. I hope your bus back to London SW3 had a puncture. Twat.
Chris Wilson
14 Posted 14/09/2015 at 08:31:47
Hmmmm...I'm not a psychologist, or have any real expert insight in the human mind. But I'd say Everton have broken Jose. Who would've thought? We're just lil' ole Everton.
Scott Hamilton
15 Posted 14/09/2015 at 08:45:08
If their form carries on like this, he will soon be "the unemployed one"!
Matthew Salem
16 Posted 14/09/2015 at 08:47:09
So if Chelsea get relegated, do we make derisory offers for Costa to help them out?
Trevor Peers
17 Posted 14/09/2015 at 08:47:40
Jose has met his match in Roberto, when it comes to keeping cool under pressure Roberto has no equal. After witnessing his press conference's during last season awful run he doesn't have a negative thought in his body.

Unlike Jose who seems a tormented soul even when winning the premiership, he's definitely lost the plot and probably his job which is amazingly self destructive.

What a classy manager we have. He might talk sometimes like the Delphic Oracle but our Boss is a gentleman and makes up for froth spouted by Chairman Bill.

JM Is a classless clown though, it kills him to admit that his team were second best. I hope he gets the sack.

I do think in January we should put in an offer in for Hazard. Lol

(No disrespect to any special needs people intended.)

Eddie Dunn
32 Posted 14/09/2015 at 15:08:49
Mourinho is a prima donna of the highest order. Spoilt, arrogant and selfish with little regard for his employees (Doctors), and lacks class (talking about players contracted to other clubs).

As Ross said, he was behaving badly when the pressure was mounting at Madrid.

I hope that this is a continuing trend and he implodes along with his ugly team of horrid shysters.

I wonder what Stones is thinking about his suitors now?

Peter Conley
33 Posted 14/09/2015 at 15:34:29
My interpretation of Roberto's comment was that he preferred the abusive Jose. Last season they had won 6-3 so charm was oozing out of the blinkered one. This time 3-1 flattered Chelsea so the mask slipped. Monday now. Has he apologised, does anyone know??
Tony McNulty
34 Posted 14/09/2015 at 15:38:54
As the Aussie cricketers in the slips used to shout when a nervous batsman would come to the crease: "Pressure!!"

The man is clearly under the cosh; there is little rational basis to these sorts of outbursts. He is momentarily losing it. And if he loses to Wenger next week look out for even more sloppy emotional behaviour.

I would take Hazard though, he'd be a decent replacement for Osman if he's able to get back to form.

You dodged a bullet there Stonesy.