Lukaku never felt Baggies defeat was on the cards 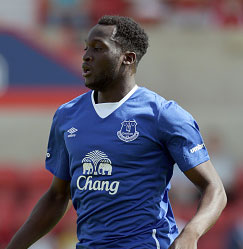 Romelu Lukaku says that even at 2-0 down he was convinced Everton would come away from The Hawthorns with a result last night.

The Belgian grabbed two goals, including the match winner six minutes from the end, and an assist for Arouna Kone's equaliser as the Blues overturned a two-goal deficit to win for the first time in the Premier League era.

There were few signs after Craig Dawson had headed in the Baggies' second goal of the fightback to come as Everton had been below par for the first 55 minutes of the contest but Lukaku equalised almost immediately to spark a memorable turnaround.

Speaking with the media after the game, the 22-year-old said he never lost faith in the team's ability to turn things around, however.

"At half time the manager and the experienced players spoke up and then we tried to do the rest," he told Sky Sports' Geoff Shreeves. "We conceded the early goal in the second half but I never had the feeling we wouldn't win this game. Credit to the players who came off the bench; they helped us.

"[After the first goal] I knew that we would win this game. I had that feeling because offensively we more grip on the game. Ross did really well, Arouna as well and Geri. And me, myself, I must try to provide and to score goals and I'm very happy that we won today."

We're a lot more dangerous this year. We must still improve as being a 2nd half only team will not get us to the top 4. It does feel a lot more like Roberto's first season than his second though.

We now have a good bunch of players emerging: Barkley, Lukaku, Deulofeu, Browning, Galloway, Stones... with a few more like Ledson and Garbutt, we could have one of the most aggressive and speedy sides in the league marshalled by Jags and McCarthy!

Finally, delighted that Deulofeu showed his worth last night. Hopefully he can now quickly expunge his memories in Spain and continue his progression as a world beating winger with us.

Brian Hill
9 Posted 30/09/2015 at 06:26:47
According to Martin Tyler, WBA have never won a game under Pulis in which the opposition scored - hence the look of terror on their fans faces after our first goal.