Elstone and Ryazantsev appointed to Everton Board 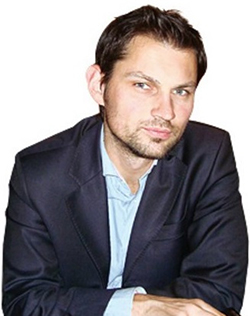 Ryazantsev, not to be confused with the Ural Sverdlovsk Oblast winger who, coincidentally, was linked with Everton during David Moyes's reign, is a long-time business associate of new majority shareholder, Farhad Moshiri.

He "has a background in corporate finance and has held management positions at the Royal Bank of Scotland and ABN AMRO Bank," according to a statement on evertonfc.com.

Also known by the common nickname for Alexander, Sasha, 42-year-old Ryazantsev's bio on his now defunct blog page says that he gained "a BSc in Commercial Management from Russian Plekhanov University of Economics and a Msc in Finance from the London Business School."

It went on to say: "My total experience in finance is over twenty years and before my roles in the City, I held various positions at a Russian metals and mining and financial conglomerate in both Moscow and London, focusing on raising international finance and managing a diversified investment portfolio across asset classes."

That's tempered my "We've got a new major shareholder that knows what he's doing" excitement a bit!!

Robert Elstone and Alexander Ryazantsev have been appointed to Everton's Board of Directors.

Ryazantsev, who has worked with major shareholder Farhad Moshiri in a number of previous roles, has a background in corporate finance and has held management positions at the Royal Bank of Scotland and ABN AMRO Bank.

Of course you are correct. I personally know nothing about Ryazantsev and am not in a position to comment about him. However it's far from surprising that Moshiri would bring in his own man onto the board.

My disappointment stems from the fact that it is clear a large proportion of the miss management of our finances and commercial enterprises since 2009 have been overseen and managed by Mr Elstone. I had hoped that a new major shareholder would look to clear out such people rather than promoting them.

Then again as Elstone himself is a shareholder maybe it isn't easy to sack/remove him therefore this is a cunning move to relieve him from the position of Chief Executive and "promote him out of trouble"?

I hope you are correct in saying that they 'promoted' him out of trouble. As you say we can't comment on the other guy but I'm not sure being associated with RBS over the past few years is something to brag about – we will see how it all pans out in the months and years to come.

That will go down well with some.

I hope Mr Ryazantsev is a business colleague of Mr Usmanov.

By the way, if Elstone has not previously been a Director who was it who earned £300k + last year?

On the bright side, one of Moshiri's associates has joined as well. So that's now two new board members from outside the club. I think everyone agreed this was much, much needed.

If we can get a shit hot CEO in then we may have a good balance of old and new.

I will take evolution, not revolution, for now. It's early days.

Why would you say that? He's still CEO. If anything, he now has a more powerful position.

I was hoping Elstone would be sharing a taxi with Martinez at the end of the season.

Fair comment Ged, it may be that Martinez will also be told the targets that he has to meet and that will decide his fate either to stay or go. None of the Everton board are stupid or incompetent in any way, they know that the fan base isn't happy with RM and with more finance available he is going to have to meet higher standards.

I live in hope by remembering the Kendall and Ferguson were a game away from the sack they were that bad. RM may still stick his hand down the toilet and pull out a Mars Bar.

Nick Page
24 Posted 16/03/2016 at 20:03:33
I would read that as associate of Usmanov. I work with in and amongst some of this crowd and I would say big things are definitely afoot here. This is a major step to change. IMHO of course
Gordon Roberts
25 Posted 16/03/2016 at 20:28:16
Not sure of the governance arrangements in regard to voting rights, but the inclusion of Ryazantsev on Everton's Board will strengthen Moshri's influence. Elstone's position is very interesting, vote with the majority shareholder and he becomes secure whereas opposing Moshri and Ryazantsev leaves him vulnerable.

Despite saying all the right things in interviews over the weekend, let's not underestimate Moshri's financial and personal objectives. The power game is well and truly underway in Everton's boardroom. Interesting times ahead for sure.

Elstone: (smiling) - 'Well listen guys, can I say that I'm really excited by the idea of leading the club into a new era, moving forward in real terms and helpi...'

He is interupted by an unsmiling Derren Nesbitt look-alike with a dueling scar on his cheek.

"I am Alexander, I vud like tea - lemon, no milk no sugar'

He then points at Elstone.

Elstone laughs and says "No actually, I'm the CE.."

Bob is suddenly slapped hard in the face with the two leather gloves in Ryazantsev's fist.

Bob is stunned and looks for an ally but everyone suddenly seems fascinated by the carpet and no one steps forward.

He leaves the room red-faced, hurt and trying to hold back tears.

He then hears laughter and as he looks back to the board-room, the blinds are slowly being pulled down.