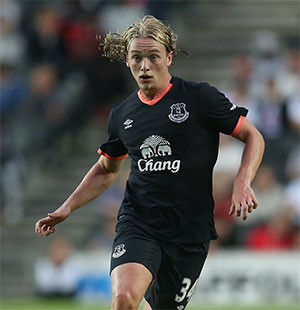 Tom Davies could make his second start in the absence of Idrissa Gueye who is at the Africa Cup of Nations
With a strong start to 2017 in the form of Monday's win over Southampton, Everton's focus shifts to the road to Wembley against Leicester City.

With the Premier League's top six in ominous form and Everton's form still plagued by inconsistency, a crack at finishing in the Champions League spots — always an ambitious target — looks to be a very long shot and, depending on what happens in the cups, European qualification via the league might also end up being beyond Ronald Koeman's team.

That leaves the FA Cup as perhaps the most viable route to both Europe and the end of what will be a 22-year wait for silverware for the Blues. It was a topic that came up during the sit-down chat at the AGM between Bill Kenwright, Farhad Moshiri and Darren Griffiths on Wednesday evening and while the club's major shareholder rightly cited Premier League performance as the best measure of Everton's progress, the Chairman argued that winning silverware — in any guise — has to be a priority as well.

Having bombed out of the League Cup after just two rounds, Koeman has indicated that he and his players will be fully focused on the FA Cup which will hopefully mean a full-strength or similarly strong team selection for the visit of Leicester, one of three all-Premier League ties in the third round.

Idrissa Gueye will be missing for the first time since the one-game ban he served in early November as he takes part in the Africa Cup of Nations for Senegal. With James McCarthy ruled out with a hamstring injury, Muhamed Besic not due to return until next month, Tom Cleverley out of favour and Darron Gibson lost in the treatment room somewhere, the loss of the midfielder for a month had the potential to be crippling but the emergence of Tom Davies has come at just the right time.

An impressive substitute at Leicester and Hull and then a starter for the first time under Koeman against Southampton, the 18-year-old may still be raw but he is ready to step into the breach and is expected to be in the line-up to face the Foxes this weekend, most likely alongside Gareth Barry.

Maarten Stekelenburg's injury means that Joel Robles will continue in goal and both Romelu Lukaku and Ross Barkley is a shoo-ins in the forward areas but the rest of the line-up is more or less up to the manager's whims and whether he will make more changes than are necessary to a side that has finally started showing some consistency of late.

Aaron Lennon is a doubt after picking up a knock, either in the last game or in training, and new signing Ademola Lookman is cup-tied (he will be paraded on the pitch to greet the fans, however) which could mean a return to the line-up for Enner Valencia and a spot on the bench, perhaps, for Gerard Deulofeu who hasn't played since the defeat at Watford almost a month ago.

In defence, meanwhile, both Phil Jagielka and Mason Holgate will be keen to see action again and could very well do so if Koeman goes with three at the back like he did at the King Power Stadium on Boxing Day — the 20-year-old had another impressive outing that day.

Claudio Ranieri's team selection will also be affected by AFCoN, with all three of Islam Slimani, Riyad Mahrez and Daniel Amartey unavailable because of the tournament. Jamie Vardy, who was missing the last time the sides met two week ago, is back from suspension, however, while Danny Drinkwater could also return and new £15m signing Wilfred Ndidi is elgible to start if called upon.

While the Champions' defence of their stunning title has fallen well short of their expectations and they existed the EFL Cup at the same stage as Everton with defeat to Chelsea, they have, of course, made an impressive debut in the Champions League so they can't be discounted on the basis of their league form which has been very patchy.

A home tie for a Toffees team that feels like it is gathering momentum coupled with the psychological advantage of having won at Leicester so recently should be enough to give Koeman's men the edge in this one. Hopefully, it will mark the beginning of another march on Wembley and the chance to go one better than last season when the dream ended in heartbreak at the semi-final stage.

I'm thinking Koeman may go 3 at the back with Holgate starting to counteract the Leicester break. Further forward, Valencia may start over Mirallas. I do hope Davies gets the nod again.

Maybe try Crofts Social Club on City Road as it's spacious, you can take some chips in there from the chippy and it's easy enough to get served.

Best I've got to offer, mate.

Never no with Barry though as he can dictate the tempo sometimes; he's also a good mentor for Davies, but we need to play fast to be at our best, and unfortunately Barry doesn't have that in his locker.

We've been a little unfortunate this week in regards to Gana going away, McCarthy being injured as wel as Gibson and Besic. Davies has been a blessing.

The Gibson situation is horrendous, – whoever gave him a new deal needs sacking.

Too attacking??
Too lightweight??
Too ambitious??

David Pearl
13 Posted 07/01/2017 at 03:33:49
A centre midfield of Barkley and Davies? I personally don't think they are ready to provide the axis we need. They are not disciplined enough.

I'm expecting Barry to play behind those two. He might not be able to play 2 games in a week anymore but he is nowhere near finished.

I wouldn't be surprised however, if we do get another centre-back, to see Jags move to Sunderland before the end of the month.

Plenty of legs and attacking threats. I also like the all English midfield!

All media outlets just rattle on about the training ground naming rights and the preferred dock stadium development, but they also refer to a, 'new a shirt sponsorship deal', does anyone now who it's with, how long etc?

Hopefully it's not a bloody renewal with Chang so we still continue to have two fucking white elephants plastered on the front and it's still to be manufactured by no other than that 'classy' (out-dated) world renowned (wtfrt) Umbro.

Thailand don't have the rights to show the FA Cup games.

Most of all, I want Everton to progress, no matter who plays; it will not be an easy game.

We should have too much for Leicester, as they will be missing more players than us.

Our selection will be interesting, as any players we are hoping to ship out (domestically) will not want to be cup-tied.

Saturday 3:00pm KO, FA Cup – forget what the media say, this is The Cup, the beginning of our Cup Run.

I am at home listening to a bit of Van The Man – I am a Soldier of Fortune; Take Me Back Way Way Back; Saturday Morning Listening to Debussy; Rave on John Donne... I will get ready soon and leave for The Dark House.

From my house in New Brighton, I can normally see the Liverpool Waterfront and from another window I can see Goodison – wonderful. Today, it is all covered in mist... but slowly clearing – maybe a statement about Everton and our future.

Think this will be a hard game, but always get a shiver when the FA Cup, comes around. It might have lost a bit of its romance, but it will always be the most special competition in the world to me.

Love your last sentence, George, I would love it to be true. I'm just getting the tea-leaves out now, to see what Mystic Meg thinks!

Cosmic grooves right over The Mersey to all our Blue Brothers.

There is a link on vipbox tv guys for our game later.

Give us a fucking cup, Everton, especially for all the fanatical young Toffees, who, just like yourself, George, live for the blues...!

The shirt sponsor mentioned was an extra one on one of the sleeves. We will probably have to wait till the Chang deal expires before that's changed... Which I don't know when that is.

I have a feeling that all our future sponsors will be from companies owned by the USM people.

What surprises me nowadays about players, is the time it takes for them to get over injuries. I understand the severity of ligament damage, but so called knocks seem to take weeks nowadays!

We have a well paid medical team so I suppose they know best.

Top that off, a minute later with Gobshite Lawro claiming it's a three-horse title race between Chelsea, Man City and the RedShite despite the fact Spurs will go 2nd if/when they beat West Brom in the Saturday lunchtime kick off next week and have the best defensive record in the Premier League.

Mike Green
39 Posted 07/01/2017 at 13:06:18
Good shout, Colin – I thought Spurs (particularly defensively) were superb on Wednesday night. They're a far better team than Liverpool and expect them to prove it come May.

Add City, Chelsea, Arsenal, even Man Utd (who'll do their level best to put as spanner in their spokes) and it wont be easy for LFC. Touch wood they'll get Europa qualification to really put the brakes on them next year.

Tony Draper
41 Posted 07/01/2017 at 13:13:46
For those seeking streaming, looks like we're out of luck today. livesoccer.tv lists only BBC Radio coverage in GB & Eire. Normally the best "go to" site for finding foreign channels that are broadcasting.

Then look the channel up via Mobdro (app) on any compatible device (phone, tablet or firestick) via wifi. However, I managed to get a stream via Mobdro last week, just took ages to find, so I missed a good portion of the first half.

Kim Vivian
42 Posted 07/01/2017 at 13:21:44
I am usually very upbeat but for some reason feel a wee bit pessimistic about this game. No Gana, no McCarthy, no Calvert-Lewin, Lennon doubtful, Lookman cup-tied, Vardy back, Huth back? etc.

Could see a draw but let's hope Valencia turns up today, Lukaku puts a shift in and we do 'em first time round. Could be a stage for Deulofeu to show us what he can do. I'd like to see him on today.

Not a winger in sight.

Strange side today IMO with no 'real' wide player on view. If Valencia starts out wide, what about the other wing?