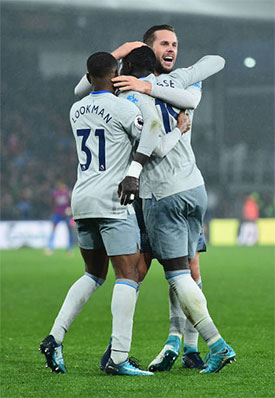 Fortune smiled on Everton again as they took a point from the Premier League's bottom club on the back of a disjointed display in the rain at Selhurst Park.

The Blues made the worst possible start as James McArthur despatched Jordan Pickford's parry off Ruben Loftus-Cheek's shot into the empty net with just 50 seconds on the clock but were level just four minutes later from the penalty spot.

Wilfried Zaha restored the Eagles' lead later in the half but the home side shot themselves in the foot in stoppage time before the interval when Julian Speroni played Scott Dann into trouble and Oumar Niasse was sent clear to slide home a second equaliser.

Everton, who were better defensively and in midfield after half-time, almost took the lead through substitute Dominic Calvert-Lewin early in the second period but David Unsworth's men were generally poor going forward and rode their luck against Palace's set-piece threat at the other end.

Unsworth had kept faith with Gylfi Sigurdsson in the “number 10” position behind Niasse, leaving Wayne Rooney and Calvert-Lewin on the bench. Morgan Schneiderlin started alongside Idrissa Gueye but lasted just 45 minutes, Tom Davies's energy being preferred to the Frenchman's laid-back demeanour in the second half.

Michael Keane was preferred to Ashley Williams but the England defender was caught napping inside the first minute as he ushered Loftus-Cheek into the box with slack marking, allowed himself to be turned easily by the Palace man but was initially relieved to see Pickford push the resulting shot away.

Unfortunately, the goalkeeper only pushed it straight to McArthur who couldn't miss from close range.

A nightmare start was wiped out, however, by some generous refereeing from Anthony Taylor who pointed to the spot when Niasse went down as he tried to charge past Dann towards goal. Leighton Baines stepped up and despatched the penalty with his restored aplomb to level the score with five minutes gone.

Niasse came close to putting Everton ahead 12 minutes later when his determination took him past two defenders but Speroni denied him with an out-stretched palm while McArthur forced a low save from Pickford in the 33rd minute with a placed effort as Roy Hodgson's men continued to dominate the contest.

Two minutes later it was 2-1. Joel Ward was afforded space down the Palace right to whip a cross behind the visitors' defence and in front of Pickford and when Zaha arrived untracked at the back post, he was able to convert a simple chance.

Ademola Lookman lashed a half-volley over the bar but Everton generally lacked penetration and composure and were heading into the interval a goal down when Speroni eschewed the easy option of a long clearance and set up Everton for their second goal.

Dann collected his pass with three grey shirts around him whereupon Gueye dispossessed him and Sigurdsson slipped a pass to the open Niasse. The Senegalese striker kept his cool to slide the ball past the stranded ‘keeper to send the two sides into the break at 2-2.

Unsworth introduced Calvert-Lewin and Davies for Lookman and Schneiderlin at half-time and it resulted in a lot more bite in the middle of the park and some aerial threat up top.

The best chance for the Blues in the second half arrived early and at Calvert-Lewin's feet, however, after Sigurdsson picked him out from the by-line but his left-foot shot was blocked by Speroni.

Sandro Ramirez would come on later for Aaron Lennon but even with three strikers on the pitch, Everton struggled to pose any threat. Thankfully, Palace weren't much better, even after Christian Benteke was introduced for the last quarter of an hour or so.

The Belgian did squander the best chance for Hodgson's side, though, following another error by Keane. Zaha capitalised as the centre-half dithered and knocked it on to Benteke but he dragged a horrible effort wide without troubling Pickford.

Sandro put a later header over the bar from Jonjoe Kenny's cross and Benteke drew a final save from Pickford with a thumping effort in the last minute but the spoils were eventually shared on a sodden afternoon in south London.